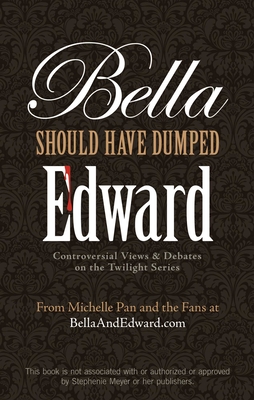 Bella Should Have Dumped Edward (Paperback)

Controversial Views on the Twilight Series

The fourth Twilight book is out, but many controversial issues remain unresolved and open to debate. Now the devoted Twihards at BellaAndEdward.com argue passionately about what really happened and what should have happened.

•Who should Bella have ended up with, Jacob or Edward?
•Should Bella have become a vampire?
•Which character was miscast the most in the movies?
•If you could be any Twilight character, who would you be?
•Which movie has stayed truer to the book?
•Which event in the Twilight saga was the most surprising?
•Should Breaking Dawn have ended with a fight?
•Which character's story would make the best sequel?
•Which vampire power would you rather have?

Michelle Pan is the owner of BellaAndEdward.com, one of the largest Twilight saga fansites on the web. She has been interviewed by many media outlets including ReelzChannel.com, Business Week, and her local news station, KXAN. Michelle has had the opportunity to attend the Twilight premieres and interview many important cast and crew members, including author Stephenie Meyer. She lives in Austin, Texas.
or
Not Currently Available for Direct Purchase
Copyright © 2020 American Booksellers Association