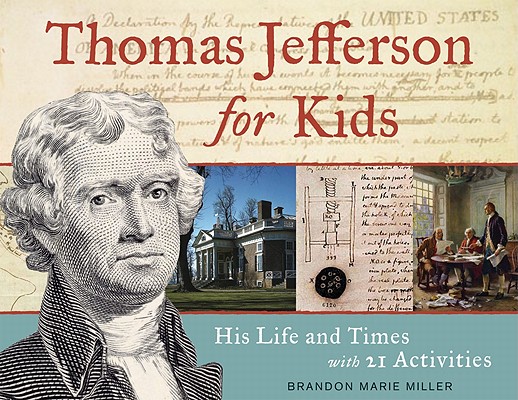 His Life and Times with 21 Activities (For Kids series #37)

An architect, statesman, farmer, and inventor, Thomas Jefferson had few equals among this nation’s founders. Left fatherless at a young age, he was a hardworking scholar who came into his own as a lawyer, landowner, and county leader. Elected to the Virginia Assembly in 1769, Jefferson became an eloquent critic of the colonial policies of Great Britain and King George III. His talents made him the perfect candidate to write the Declaration of Independence, which set the United States apart in a world ruled by monarchs.

Jefferson, however, was not without his contradictions. His quill penned the immortal phrase “all men are created equal,” but during his lifetime he owned 600 slaves. And though he sought elected office, he was sensitive to criticism and often wished to escape his public role and return to his Monticello estate.


Praise For Thomas Jefferson for Kids: His Life and Times with 21 Activities (For Kids series #37)…

"The volume offers the chance to delve into Jefferson's life and be inspired by the range of his interests."—Kirkus Reviews

"Altogether admirable. Brandon Marie Miller has written a concise, graceful, and accessible biography that carries lightly an astonishing amount of information and insight. This book is illuminating and brimming with respect for its subject and its readers. The activities are well-chosen to give young readers a sense of what Thomas Jefferson's world was like.  Highly, and delightedly, recommended." —R. B. Bernstein, distinguished adjunct professor of law, New York Law School, and author of Thomas Jefferson and The Founding Fathers Reconsidered

Brandon Marie Miller is the author of George Washington for Kids and Benjamin Franklin, American Genius.
Loading...
or
Not Currently Available for Direct Purchase