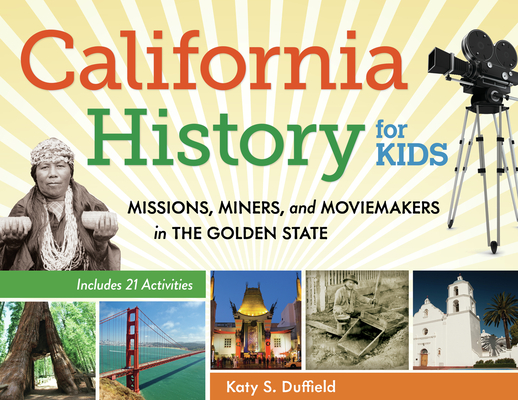 Missions, Miners, and Moviemakers in the Golden State, Includes 21 Activities (For Kids series)

The story of California is the story of dreamers—explorers, gold miners, immigrants, ranchers, moviemakers, farmers, and everyday Americans who headed west for a fresh start. The first native inhabitants arrived 9,000 years ago, ancestors of the tribes who would greet the Spanish in the 1700s. Father Junípero Serra later established a chain of missions along the coast, expanding European and Mexican influence. But when gold was discovered in 1848, the rush was on, and two short years later California became a state. After the gold ran out, other rushes followed, from agriculture to industry, Hollywood to Silicon Valley.

California History for Kids includes a time line of significant events, a list of historic sites to visit or explore online, and Web resources for further study. And to get a better idea of the scope of California history and the lives of its citizens, readers can:

* immortalize their handprints in plaster

Author Katy Duffield tells the rich story of the men and women who, despite challenges and occasional hardships, settled and built the vibrant cities and bountiful farms, ranches, and orchards of the Golden State.


Praise For California History for Kids: Missions, Miners, and Moviemakers in the Golden State, Includes 21 Activities (For Kids series)…

"[California History for Kids] covers all of the state's history and places it within the larger context of American history, making it a good classroom or library resource."  —School Library Journal

Katy Duffield is the author of the picture book Farmer McPeepers and His Missing Milk Cows and five nonfiction library reference books for older readers. She has also written for numerous children’s magazines including Highlights for Children, Appleseeds, Hopscotch, and Clubhouse.
Loading...
or support indie stores by buying on