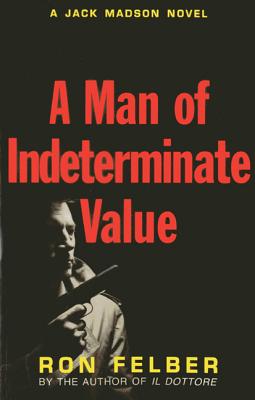 A Man of Indeterminate Value (Paperback)

In a world plagued by corrupt corporations and sinister forces that prowl the global landscape, John "Jack" Madson seeks salvation from deep within the man he is today and the man he aspires to be. In the tradition of Raymond Chandler, John Grisham, and Michael Connelly, this crime fiction series launches with three noir thrillers bristling with authenticity, insight, and social commentary. From the boardrooms of Wall Street, to the steamy backstreets of Bangkok, to the secret Triads of Shanghai, award-winning author Ron Felber, originator of the FOX television series The Mob Doctor, takes his reader into the violent, surreal, and sex-crazed underbelly of 21st century America, the "empire in decline." Witty, riveting, and diabolically clever, the heart-pounding pace, exotic locales, and unforgettable characters make the "Jack Madson" series a welcomed innovation within the genre of crime fiction. A Man of Indeterminate Value (Book 1), introduces ex-cop Jack Madson as a disgraced Wall Street take-over artist and target of a failed suicide scam that leaves him the "most wanted" man in the Garden State of NJ. Madson is on a personal mission to take on corporate forces hell-bent on his destruction as they seek to IPO game-changing bio-medical technology to the Street worth hundreds of billions of dollars.

Ron Felber is a graduate of Georgetown University and Loyola University Chicago, where he earned his master s degree. After graduation, he worked as a deputy sheriff, transporting federal criminals. His writing career began with articles for True Detective magazine and his latest title, Mob Doctor, was the basis for the FOX Television series of the same name. Mr. Felber lives in Mendham, NJ."
or
Not Currently Available for Direct Purchase
Copyright © 2020 American Booksellers Association