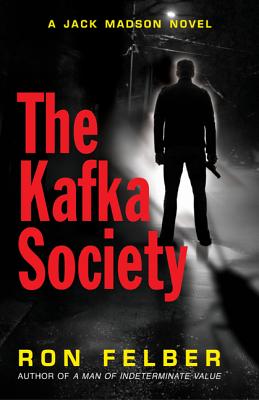 THE KAFKA SOCIETY by Ron Felber finds Jack Madson, (A MAN OF INDETERMINATE VALUE), on another adventure. After a night of clubbing, Jack has no memory of how stripper, Amber Starr got into his bed. Great sex doesn t make up for the discovery of a severed head in the trunk of his Mustang convertible. Is Madson a murderer? Before that question can be answered he finds himself helping old high school nemesis, Tom Dougherty, FBI's head of East Coast Operations, to get disentangled from a blackmail scam set up by porn queen Havana Spice. Reluctantly, Madson agrees and it's through Havana that the mask is lifted from Dougherty to expose him as head of a criminal organization that specializes in the most monstrous of enterprises: global human trafficking, run from the underground tunnels beneath New York City, directed by a coterie of intellectual thugs known as the Kafka Society. Once again, the reader follows Madson through a wealth of evil and exotic pleasures before the exciting conclusion of this thrilling page turner.

Ron Felber is a graduate of Georgetown University and Loyola University Chicago, where he earned his master s degree. His writing career began with articles for True Detective Magazine and he went on to author several books including Barricade s A Man of Indeterminate Value, (the first in the Jack Madson trilogy) and Il Dottore: Double Life of a Mafia Doctor, which was the inspiration for a TV series. Mr. Felber lives in Mendham, N.J."
or
Not Currently Available for Direct Purchase
Copyright © 2020 American Booksellers Association