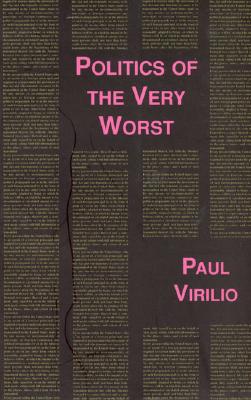 Politics of the Very Worst

Summarizes Virilio's speculations about the impact that accidents will have on the planet now that we operate on one-world time.

Based upon a 1996 conversation Paul Virilio had with French journalist Phillipe Petit, The Politics of the Very Worst summarizes Virilio's speculations about the impact that accidents will have on the planet now that we operate on one-world time. Virilio argues that accidents have now lost all particularity. Accidents and events can no longer be confined to markers in history like Auschwitz or Hiroshima. Trajectories once had three dimensions: past, present, and future. But now, the hyper-concentration of time into real time reduces all trajectories to nothing. Consequently, an accident of time is bound to affect our entire being as well as the entire planet. And this is the hidden face of technical and scientific progress that Virilio is attempting to reveal, shrugging off any illusion we may have left about its alleged benefits.Globalization doesn't make the planet bigger, it signals the beginning of the great confinement. Speed pollutes the distances of the world. After the green ecology (the pollution of nature), we are now experiencing another, more invisible and mental, kind of pollution: the gray ecology. Soon, Virilio suggests, we are going to experience the end of the world--not the apocalyptic end, but the world as finite. The communication revolution, the attainment of absolute speed, is the reduction of the world to a virtual city in which democracy is no longer possible. This extermination of world-space is a cataclysmic event. For the first time, history has hit a cosmological limit.