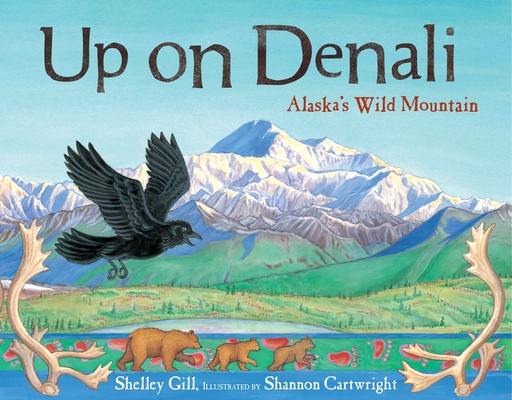 From its origins as a trick played by Raven (the scientific version involving plate tectonics is also included) to the flora and fauna and human explorations, this colorful children's book reveals every facet of Alaska's great Denali mountain. Employing the Gill-Cartwright signature style of mingling fiction and fact, this book is brimming with fun and fascinating information and wonder about the tallest, coldest, wildest mountain in America. Here is the story of Denali - its wildflowers and wildlife, tundra and glaciers, legends and history. Come explore Alaska’s ultimate landmark.

Shelley Gill is one of the most prolific and admired children's book authors in Alaska. Her fourteen books include Kiana's Iditarod, Swimmer, and Sitka Rose. She likes in Homer, AK.

Shannon Cartwright has illustrated more than twenty children's books, most of them about the land, people, and wildlife of Alaska. Recent books include Alaska's 12 Days of Summer and Sitka Rose. She has lived for three decades in the remote Alaska bush, not far from Denali.
Loading...
or support indie stores by buying on