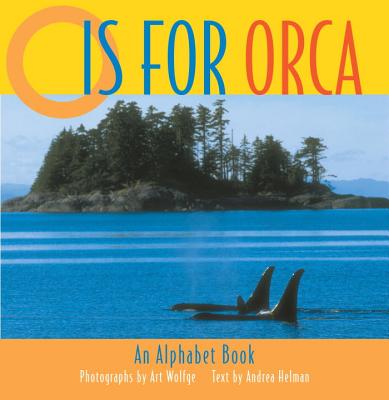 O Is for Orca

This is ABC the Pacific Northwest way: A is for auklet, B is for black bear, C is for coyote....

Art Wolfe's stunning color wildlife and nature photographs teach young children the alphabet while giving them a sense of wonder and appreciation about the bounty of nature. The old-fashioned A is for Apple is replaced by A is for Auklet. F is for Fir Tree, H is for Haida Totem Pole, and so on through the alphabet. Featuring the work of preeminent nature and wildlife photographer Art Wolfe, O is for Orca reveals the natural world in simple yet captivating images--each accompanied by brief informative text--for young book lovers and their parents. Andrea Helman's brief text includes an accessible introduction or fact about the animal, plant, person, or object depicted.

Praise For O Is for Orca: An Alphabet Book…

"Each letter of the alphabet is illustrated by an eye-stopping, full page color photograph by internationally acclaimed Northwest nature photographer Art Wolfe. Encourage a small child’s interest in nature, and a desire to protect nature will take roo

Art Wolfe is one of the world's most acclaimed photographers, considered a master of composition and light. Based in Seattle, he travels the world shooting his outstanding images of wildlife and nature. His photographs appear in publications around the world, including National Geographic, Smithsonian, and Outside. He has published fourteen books, including Migrations, Penguins, Puffins, and Auks, and two books for children, Chameleons and Hiding Out.

Andrea Helman is an award-winning television writer, producer, and director based in Seattle. Her humor articles have appeared in numerous national publications, such as Redbook, The Christian Science Monitor, McCall's, and Left Bank. This is her first children's book.
Loading...
or support indie stores by buying on