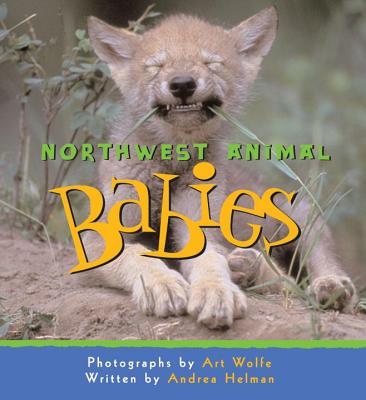 Is there anything cuter than a baby animal? Here, wee ones of the Northwest animal world &#8212; including wolves, foxes, sea otters, cougars, and crows &#8212; are portrayed in stunning images from world-renowned photographer Art Wolfe. His ability to capture a burrowing owlet in mid-yawn or a bobcat mother tenderly protecting her kittens delights children of all ages. Fun facts &#8212; Did you know that a four-day-old pronghorn antelope can outrun a human? Or that a mama sea otter wraps her pup in kelp so it won’t float away? &#8212; educate as they entertain, making Northwest Animal Babies a must for any child.

"Animal lovers won’t be able to resist this natural history treat with photos that catch animal babies at their cuddly best." &#8212;Booklist "Breathtaking photos of babies in the wild. This gorgeous book will delight the little ones."&#8212;Seattle Times "Ani

Art Wolfe is one of the world's most acclaimed photographers, considered a master of composition and light. Based in Seattle, Washington, he travels the world shooting his outstanding images of nature. His photographs appear in national and international publications, such as National Geographic, BBC Wildlife, Ranger Rick, Chickadee, and Smithsonian. He has published several books for children.

Andrea Helman is a freelance writer and an award-winning television writer, producer, and director. Her articles and humor essays have appeared in numerous publications, including. She is the author of two books for children, 1, 2, 3 Moose and O is for Orca, which was a 1998 Children's Choice Picture Book Nominee and an ABC Building Blocks Catalog Selection. She lives in Seattle, Washington.
Loading...
or
Not Currently Available for Direct Purchase