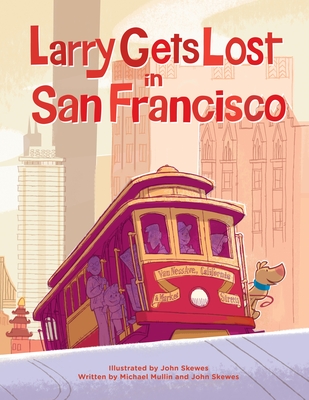 Larry Gets Lost in San Francisco

Follow the fun adventures of the dog Larry, who after chasing down a donut, loses his owners and travels around the city's landmarks and cultural attractions before reuniting with his family. Filled with candy-colored retro illustrations, this book provides children with a dog's eye view of the City by the Bay. Among Larry's stops are such classic locations as Golden Gate Bridge, Alcatraz, Coit Tower, Ghirardelli Square, Fisherman's Wharf, Chinatown, AT&amp;T Park, Mission Dolores, and Cliff House. Sidebar entries add to the story, offering factoids about the places Larry visits.

Praise For Larry Gets Lost in San Francisco…

“Candy-colored retro illustrations accompany a rhyming account of the adventures of Larry, a lost pooch, as he traverses through our City by the Bay’s fabulous landmarks and cultural attractions. The easy-to-follow story is complemented by clever geography and history trivia, making Larry’s mis-adventures the perfect teaching tool before or during a jaunt into the city. Lucky for us, Larry’s owners aren’t so leash-savvy, so we can get a dog’s-eye view of Los Angeles, Seattle, New York City, Chicago, and Texas, too.”
—Melanie Heimburg, Dandelion

“Taking a romp through the city doesn&sup1;t have to be exhausting - just add it to your bedtime story ritual!”
—Red Tricycle