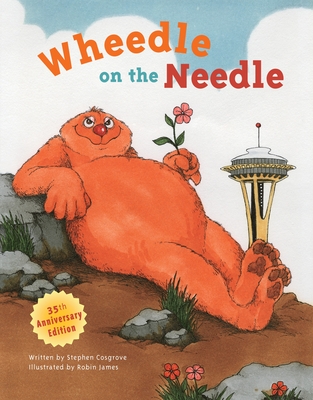 Wheedle on the Needle

Deep in the woods of the Pacific Northwest lives a quiet old creature named the Wheedle. When humans move into his forests, bringing their loud city noises, Wheedle flees to the rocky peaks of Mount Rainier, and then to the very tip-top of Seattle's Space Needle.

A national bestseller, the beloved Wheedle on the Needle had much of its Seattle-centric storyline stripped from later editions. This glorious 35th anniversary keepsake edition brings back the book's original charm, inviting a new generation of readers to delight in the Wheedle's adventures.

Praise For Wheedle on the Needle…

"Armed with nothing but a guild-inducing stare and high-pitched squeal, you demanded Mom read it again. You couldn't get enough of that Wheedle. So you'll be thrilled to know that Sasquatch Books has re-released the much-loved classic Wheedle on the Needle as a special 35th anniversary edition for your own mini bookworms."
—Daily Candy Seattle

Stephen Cosgrove and Robin James collaborated on the 60-plus titles that comprise the Serendipity Books series, including such classics as Serendipity, Flutterby, Morgan and Me, and Leo the Lop.

Stephen Cosgrove’s career has spanned more than 35 years with over 300 children’s books and 30 young adult novels. Born and raised in Washington State, he now lives in Austin, TX, where he continues his writing career.

Robin James has illustrated more than 75 books, including all of the titles in the much-loved Serendipity series. A native of the Pacific Northwest, she lives with her husband in Snohomish, WA.
Loading...
or support indie stores by buying on