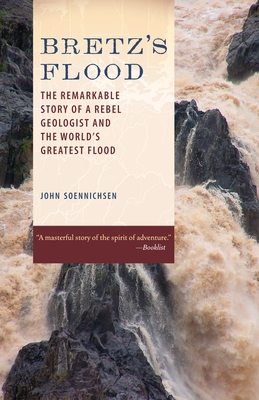 The land between Idaho and the Cascade Mountains is characterized by gullies, coulees, and deserts—in geologic terms, it is a wholly unique place on the earth. In the 1920s, legendary geologist and professor J Harlen Bretz peered back in time to answer the riddle of how this land came to be, becoming one of the first people to explore the area. Defying the conventional wisdom of his peers, Bretz saw a landscape that had been instantly scoured by a flood of unprecedented scale. Though met with public and academic humiliation—his theory sounded too much like the biblical flood—Bretz persevered and went on to discover what everyone else had failed to see.

Bretz's Flood tells the dramatic story of this scientific maverick—how he came to study the region, his radical theory that a huge flood created it, and how the mainstream geologic community campaigned to derail him from pursuing an idea that satellite photos would confirm decades later.

Praise For Bretz's Flood: The Remarkable Story of a Rebel Geologist and the World's Greatest Flood…

For the hardcover edition of Bretz's Flood: "This is a masterful story of the spirit of adventure as embodied by a man who, though almost forgotten today, was instrumental in bringing scientific inquiry out of the Victorian era and into the modern age

John Soennichsen is the author of Live! From Death Valley and Bretz's Flood. He has written more than 250 articles, essays, and short fiction pieces for a variety of regional and national magazines and newspapers. John's bachelor's degree in journalism is from the University of Oregon and his master of fine arts in creative writing is from Eastern Washington University. He lives with his family on a five-acre ranch just outside the Eastern Washington town of Cheney.
Loading...
or support indie stores by buying on
(This book is on backorder)