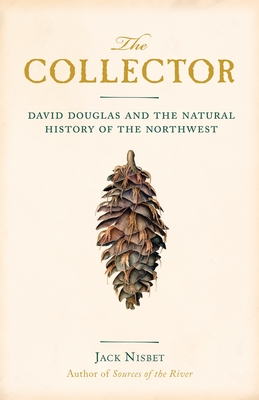 David Douglas and the Natural History of the Northwest

The Collector tracks Douglas's fascinating history, from his humble birth in Scotland in 1799 to his botanical training under the famed William Jackson Hooker, and details his adventures in North America discovering exotic new plants for the English and European market. Douglas's discoveries include hundreds of western plants--most notably the Douglas Fir.

The book takes readers along on Douglas's journeys into a literal brave new world of then-obscure realms from Puget Sound to the Sandwich Islands.

"An exhilarating biography that provides an entertaining portrait of the unfettered determination that drove one of the giants in the field of botanical exploration and infused the young nation he viewed with a keen and zealous spirit." Booklist

Praise For The Collector: David Douglas and the Natural History of the Northwest…

"Jack Nisbet’s brisk, thrilling accoun allows us to walk, ride, and paddle along with David Douglas, the tireless nineteenth-century Scotsman whose name is attached to Cascadia’s iconic fir. Nisbet takes us on the ultimate naturalist’s tour of a largely

JACK NISBET is a historian, teacher, and author focusing on the intersection of human history and natural history in the Pacific Northwest. His books include Sources of the River (recipient of the Washington Governor's Award and winner of the Murray Morgan Prize from the Washington State Historical Society), The Mapmaker's Eye (named one of The Best Nonfiction Books of the Year by The Seattle Times), and Visible Bones. He lives in Spokane, Washington.
Loading...
or support indie stores by buying on
(This book is on backorder)