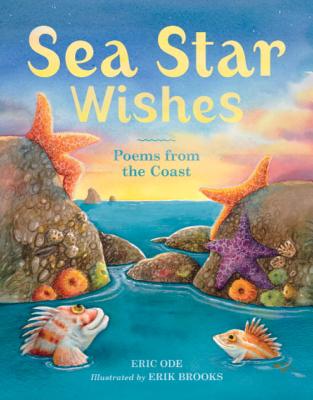 Poems from the Coast

Praise For Sea Star Wishes: Poems from the Coast…

This lovely collection of poems is accompanied by beautiful illustrations of the sealife and surrounding being described in the poems. The combination of the two makes you feel like you're standing on the beach yourself, admiring all there is to see. This book is a fun way to introduce kids to both poetry and some of the creatures of the coast!
Growing My Kids Reviews

Eric Ode is a national award-winning children's singer, songwriter, author, and poet who performs music and poetry programs for schools, libraries, education conferences, and community events. His original music has been heard on many compilation albums, national children's radio programs, and on the popular PBS series Dragonfly TV. He has contributed poetry and lyrics to two Grammy nominated CDs.

Erik Brooks is a children's book author and illustrator from Winthrop, WA. He has worked on many books, including Totem Tale, Who Has These Feet, and Polar Opposites, which won the 2011 Washington State Book Awards Scandiuzzi Prize for Children's Picture Books.
Loading...
or support indie stores by buying on
(This book is on backorder)