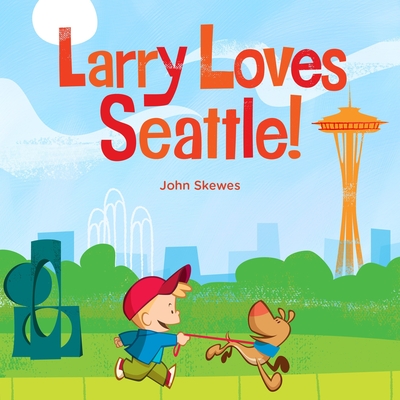 The bestselling Larry Gets Lost series heads back to Seattle in this board book featuring vibrant retro illustrations of this great American city and the perpetually lost pup, Larry.

Just like the locals and visitors, Larry the pup loves the Pike Place Market, the Space Needle, and Lake Union and many of the other sites and sounds of Seattle. Along the way, Larry makes new friends, rides a ferry, and visits the home of the Seattle Seahawks. Based on the popular children's picture book Larry Gets Lost in Seattle, families who love The Emerald City will want this charming board book for their little readers.

Praise For Larry Loves Seattle!: A Larry Gets Lost Book…

"Now the youngest kids can follow Larry's adventures around Seattle with this new board book by John Skewes. Larry the pup and his owner, Pete, visit Pike Place Market, the Space Needle and other Seattle landmarks in this addition to the 'Larry Gets Lost' series."
Seattle Times