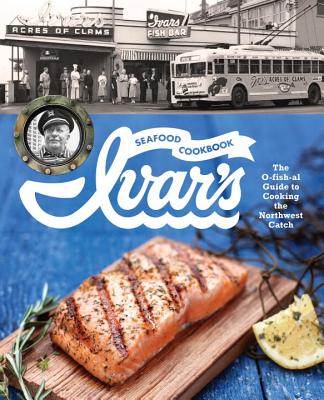 The O-fish-al Guide to Cooking the Northwest Catch

The Crew at Ivar's, Jess Thomson (Contributions by)

If Ivar's isn't a landmark, it ought to be. Serving local seafood--salmon, oysters, clams, halibut--for 75 years, it is one of the most successful restaurants in the Pacific Northwest. With their first cookbook, they serve up home-cooking recipes from the restaurant's extensive repertoire of seafood dishes. But what else would you expect from the folks whose motto is "keep clam?" Ivar's has a lively history of creative self-promotion, from their wild, giant dancing clams ads to their announced plan to introduce the iSpoon in 2015. The cookbook contains 60 of Ivar's best recipes, tantalizing photography, and a gathering of anecdotes and ephemera from three-quarters of a century of restaurant adventures, marketing feats and  pranks, and dedication to serving its customers.

Find out more at www.ivars.com

Praise For Ivar's Seafood Cookbook: The O-fish-al Guide to Cooking the Northwest Catch…

"The first Ivar’s opened in Seattle in 1938, and Ivar’s today is still the 'go to' spot for fish and chips whether for feeding fries to the seagulls on Pier 54 or grabbing a cup of clam chowder at the ball park. Ivar Haglund was far more than a jocular gent in a captain’s hat. He was also a marketing genius, a visionary, and a champion of the city’s treasures like Seattle’s waterfront, the elegant, old fashioned skyscraper Smith Tower, and traditional family fun at 4th of Jul-Ivar’s fireworks."
Tom Douglas

"No restaurant has done more for seafood's popularity in the Northwest than Ivar's. I grew up in Seattle and will always cherish the memories of the times I ate there as a kid."
Ethan Stowell

"Ivar Haglund, like my grandfather, was one of the creative restaurant pioneers that helped put Seattle on the map. His way with people, his creativity, his love for Seattle—these are pillars upon which our burgeoning food scene was built."
Mark Canlis

"A Seattle institution for more than half-a-century, Ivar’s specializes in the seafood of the rich waters of Puget Sound and the Pacific. Opening his first restaurant, Acres of Clams, Ivar Haglund built a local chain that continues to attract both Seattle citizens and tourists for fresh seafood served in copious quantities at reasonable prices. Ivar’s kitchens moved beyond everyday deep-fried items into raw, baked, and steamed oysters as well as Dungeness crabs. Local salmons of several varieties now dominate the newer, more refined eatery locations. Side dishes and seafood sauces bring out the fishes’ best qualities. In addition to being a canny restaurateur, Haglund has a playful sense of humor, so the cookbook’s text is pun-laden (or pun-leaden to the merriment impaired). Reproductions of early menus startle with their prices; for example, a halibut steak dinner for $2.35. Pacific Northwest libraries will no doubt find this title in particular demand."
Booklist

"No need to drive to the waterfront to get ridiculously amazing seafood–make it yourself at home with the help of the clam gurus. This pun-happy book is geared for the whole shebang: appetizers, salads, chowder, entrées, desserts, and more. From Dungeness crab cakes to alderwood-grilled king salmon, recipes sprinkle over 150 pages in an eye-pleasing, simple format. Caution: this cookbook will cause severe hunger when looking at the photos."
Seattle Met

"This cookbook – a first for Ivar’s – not only offers the recipe for those famous fish-and-chips, it captures the spirit of the Seattle institution. The book’s 60-some recipes come with helpings of humor, pride and a sense of nostalgia. There’s a copy of a 1950s-era menu, lots of vintage photographs, and Ivar’s trivia. Each recipe is topped with a short vignette describing its significance, ingredients, history or other Ivar’s tidbit. Most are also accompanied by colorful, mouth-watering photographs. ...the only things that seem to be missing are the saltwater and seagulls – and, as Ivar Haglund himself would do from Pier 54, fries with which to feed them."
The Spokesman-Review

"There aren’t many restaurants that are more 'Northwest' than Ivar’s, first opened in Seattle in 1938, and the 'crew' there certainly knows a thing or two about how to cook up some delicious Northwestern seafood fare. Inside, you’ll find recipes for everything from salmon, to oysters, to Ivar’s famous clam chowder."
425 Magazine

"…a handsome hardcover that contains as many puns as recipes. The recipes are serious, though. …The restaurant chain, celebrating its 75th anniversary, is a Seattle institution, and the book takes us through the highlights of its history with 'flounder' Ivar Haglund, the brilliant marketer with a sense of humor as strong as his sense of community. Readers may be inspired to make their own Mesquite Cornbread or Crispy Fish Tacos, or just to keep clam and make a dinner reservation."
Seattle Times

"In honor of its 75th anniversary, the iconic Seattle restaurant chain Ivar's shares more than 60 recipes in its first-ever cookbook. Featured dishes range from classic (Fish-and-Chips Aplenty) to high-class (Copper River Salmon Carpaccio with Blood Orange Vinaigrette). Sprinkled in with recipes and images are humorous bits of Ivar's history, appropriate for this fun-loving culinary institution with the motto 'Keep Clam.'"
Alaska Airlines Magazine

"Complete with 75 years of historic food memories, this is one book from the sea you don't want to miss."
Food Republic

"Tourists, locals and seagulls have been flocking to Ivar's locations around the greater Seattle area for generations, but for the first time, Ivar's fans will be able to make some of their favorite dishes at home. Ivar's is releasing its first cookbook, and even some of Seattle's most notable chefs can't wait to get their hands on Ivars' secrets."
MyNorthwest.com

"Is there a more iconic seafood spot than Ivar's? Acres of clams, gallons of chowder... More than chowder, though: the tried and true recipes for Ivar's crabcakes, salmon sliders, halibut and blackened ling cod."
Crosscut.com

"If you have visited Seattle and not eaten at Ivar's, you have missed one of the mouthwatering culinary treats this northwest city proudly offers. Now, as the famed seafood restaurant celebrates its 75th anniversary, this first-ever cookbook presents not only some of the recipes that have made Ivar's a favorite stop for locals and tourists alike, but also some quirky stories about the eatery's illustrious history... Cartoons, vintage photos and fun facts accompany the recipes and make this a cookbook that is as entertaining as it is practical."
BookLoons

"...represents Northwest cuisine at its best, and marks the restaurant's 75th anniversary: a fitting time for its first cookbook to appear on the market... No fish cookbook collection should be without this presentation of time-tested, unique fish dishes!"
The Midwest Book Review

"Whatever is in Ivar’s famous chowder, the white kind, millions of us crave it. It’s hard to 'keep clam' about it, as the saying goes. And now that famous recipe, as well as Ivar’s red chowder, crab cakes, grilled halibut and more are included in the new 'Ivar’s Seafood Cookbook: the O-fish-al Guide to Cooking the Northwest Catch.'"
Puget Sound Business Journal

Jess Thomson is a cookbook author and blogger.
Loading...
or support indie stores by buying on
(This book is on backorder)