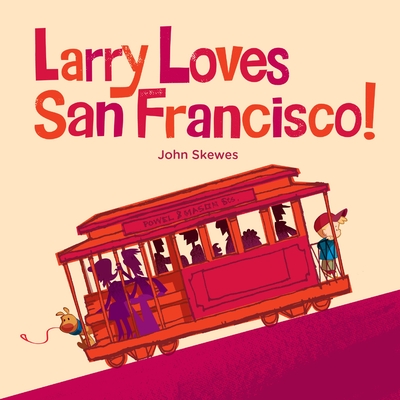 The bestselling Larry Gets Lost series heads to San Francisco in this board book featuring vibrant retro illustrations of this great American city and the perpetually lost pup, Larry.

Just like visitors and locals, Larry the pup loves exploring Golden Gate Bridge, Fisherman’s Wharf, cable cars, Lombard Street, and all the other sites and sounds of the city. Based on the popular children's picture book Larry Gets Lost in San Francisco, families who love the city will want this charming board book for their little readers.

Bedtime story or rainy afternoon read, "Larry Loves San Francisco" will jumpstart your kid’s love for the Bay all over again. With retro-illustrations that’ll remind you a little of 1950’s pop art, this picture book is a visual delight for both parents and tots. Join Larry as he rides over Golden Gate Bridge and trots his way through the Japanese Tea Garden. Kids of the Bay will squeal and point as they recognize San Francisco’s most vibrant attractions.
—Red Tricycle

This is a perfect board book for babies. Skewes’ illustrations of Larry’s romp through the city will catch your little one’s eyes. The colors are bright and filled with details parents can enjoy.
—Portland Book Review

JOHN SKEWES is a professional illustrator living in Seattle. He began work as a product designer and character artist for Disney Consumer Products before leaving to start his own company, Retrodyne Industries in 2001. His clients include Warner Bros., Hanna-Barbera, Fox, Pixar, and Simon & Schuster. As the creator and illustrator of the award-winning Larry Gets Lost™ children's book series, John has followed Larry from the southern tip of Texas to tiny Nome, Alaska, and been lost several times himself. He has illustrated over 20 children's books, including the Flintstones, Tom and Jerry, and Alvin and the Chipmunks.
Loading...
or support indie stores by buying on
(This book is on backorder)