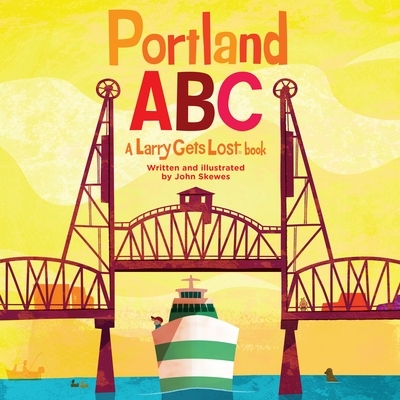 The bestselling Larry Gets Lost series heads to Portland in this colorful ABC book featuring vibrant retro illustrations of this great American city and the perpetually lost pup, Larry.

This modern, colorful alphabet book comes on the heels of the regional best-selling Larry Gets Lost in Portland. Larry and his friend Pete see Portland from A (Art Museum) to Z (Portland Zoo), and everything in between. H is for Hawthorne Bridge, P is for Powell’s Books, and W is for Willamette River—children can learn their ABCs and about their hometown! How many letters can you find around you?

Praise For Portland ABC: A Larry Gets Lost Book…

"'Portland ABC' is a banner in book form to wave with PDX pride."
The Register-Guard

"Many of the things kids love about living in Portland are right there on the page, making this a very special little book for any young—or old, really!—Portlander. Seriously, who living in Portland wouldn’t want a beautifully illustrated book with the elephant statue in the North Park Blocks near Powell’s City of Books (that’s P) representing the letter E?"
Portland Book Review

JOHN SKEWES is a professional illustrator living in Seattle. He began work as a product designer and character artist for Disney Consumer Products before leaving to start his own company, Retrodyne Industries in 2001. His clients include Warner Bros., Hanna-Barbera, Fox, Pixar, and Simon & Schuster. As the creator and illustrator of the award-winning Larry Gets Lost™ children's book series, John has followed Larry from the southern tip of Texas to tiny Nome, Alaska, and been lost several times himself. He has illustrated over 20 children's books, including the Flintstones, Tom and Jerry, and Alvin and the Chipmunks.
Loading...
or
Not Currently Available for Direct Purchase