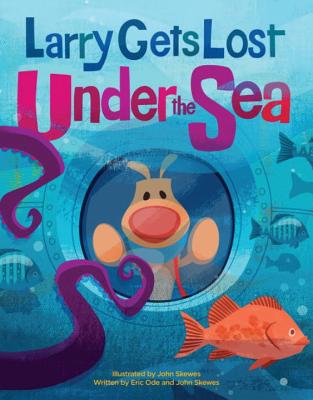 Larry Gets Lost Under the Sea

The bestselling Larry Gets Lost series heads down to the ocean in this picture book featuring vibrant retro illustrations of sea life and the perpetually lost pup, Larry.


At the beach with Pete and his family, Larry the lovable pup follows a crustacean toward the sea and is swept out by a giant wave. He dog paddles around, exploring the plant and animal life before coming face-to-face with an oceanographer who leads him on a thrilling adventure through the layers of the ocean before he’s finally reunited with his best friend, Pete, back at the beach. This fun and educational book includes a Common Core teacher’s guide.

Praise For Larry Gets Lost Under the Sea…

Larry, a lovable pup, seems to have gotten lost a few times now. This time, he’s lost under the sea where he explores plant and animal life and meets an oceanographer who takes him on a great adventure.
—Seattle's Child

I love how Eric Ode and John Skewes not only tell a captivating story, but they’ve also added in facts, diagrams, and other nonfiction text features to help further the oceanic knowledge of the reader . . . Just the story itself is enough for the youngest of children, but the book also includes bigger ideas for older children to dive into and explore. Curious readers can learn more about ocean activity from sea creatures and plants to zones and equipment that scuba divers use.
—Wild Tales Of

From the oceans of the world to how tides work, Larry Gets Lost Under the Sea explains crucial concepts with beautiful illustrations and a very cute dog. I could definitely see this book being part of a K-3 classroom library supporting Common Core standards for informational text, but it’s also a fun book to have at home for bedtime read aloud.
—Teaching My Baby to Read

I love the Larry Gets Lost books because they are whimsical but also have a lot of facts and this new Larry book called Larry Gets Lost Under the Sea talks all about the sea and the different zones where creatures live.
—An Emerald City Life

. . . an absolute gem of a book . . . we love books here that offer plenty of opportunity for discussions and questions and this book is just fab for that.
—Over 40 and a Mum to One

John and Eric have come up with something rather unique here. A fab and exciting story for little ones that also mixes a good dose of interesting ocean-going facts into the story's text as Larry dives and swims, and finds himself whisked away by submarine to the briny deep. Will Larry ever make it back to Pete? What a cool little book - it took us completely by surprise, and we love the novel approach of mixing fact and fiction in this way.
—Read It Daddy!

John Skewes is a professional illustrator living in Seattle. He began work as a product designer and character artist for Disney Consumer Products before leaving to start his own company, Retrodyne Industries, in 2001. As the creator and illustrator of the award-winning Larry Gets Lost children’s book series, John has followed Larry from the southern tip of Texas to tiny Nome, Alaska, and has been lost several times himself. He has illustrated over twenty children’s books.

Eric Ode is a national award-winning children’s singer, songwriter, and the author of Sea Star Wishes. He lives in Bonney Lake, WA.
Loading...
or
Not Currently Available for Direct Purchase