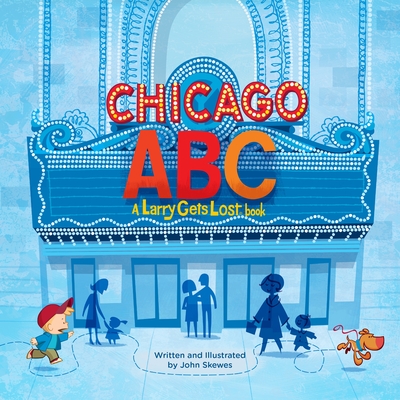 Discover Chicago from A (The Art Institute of Chicago) to Z (Lincoln Park Zoo), and everything in between! D is for Deep-Dish Pizza, G is for Grant Park, and R is for the Chicago River. Kids will have fun learning about the city as they learn their ABCs. In this companion to the best-selling Larry Gets Lost in Chicago, the dog, Larry, and his owner, Pete, take an alphabetical journey through the Windy City. Attractions that Larry visits in the book include:
The Art Institute of Chicago
Shedd Aquarium
Wrigley Field
The Field Museum of Natural History
Grant Park
John Hancock Center
O’Hare International Airport
Willis Tower

With Larry, the lovable (if easily distracted) pup, as the tour guide and vibrant retro illustrations by creator John Skewes, the Larry Gets Lost series offers fun and family-friendly travelogues to famous cities including New York City; San Francisco; Washington, DC; and Seattle--complete with information on each city's landmarks and cultural attractions.

Praise For Chicago ABC: A Larry Gets Lost Book…

“Walks us through the streets of Chicago and the alphabet all at the same time.”
—Lu & Bean Read