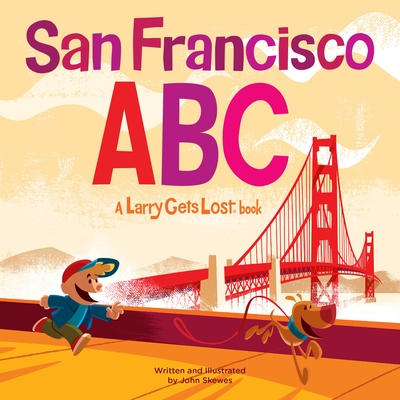 Discover San Francisco from A (Alcatraz) to Z (The San Francisco Zoo), and everything in between! G is for the Golden Gate Bridge, L is for Lombard Street, and W is for the Wharf. Kids will have fun discovering the city as they learn their ABCs. In this companion to the best-selling Larry Gets Lost in San Francisco, the dog, Larry, and his owner, Pete, take an alphabetical journey through the City by the Bay. Attractions that Larry visits in the book include:

With Larry, the lovable (if easily distracted) pup, as the tour guide and vibrant retro illustrations by creator John Skewes, the Larry Gets Lost series offers fun and family-friendly travelogues to famous cities including New York City; Chicago; Washington, DC; and Seattle--complete with information on each city's landmarks and cultural attractions.

JOHN SKEWES is a professional illustrator living in Seattle. He began work as a product designer and character artist for Disney Consumer Products before leaving to start his own company, Retrodyne Industries in 2001. His clients include Warner Bros., Hanna-Barbera, Fox, Pixar, and Simon & Schuster. As the creator and illustrator of the award-winning Larry Gets Lost™ children's book series, John has followed Larry from the southern tip of Texas to tiny Nome, Alaska, and been lost several times himself. He has illustrated over 20 children's books, including the Flintstones, Tom and Jerry, and Alvin and the Chipmunks.
Loading...
or
Not Currently Available for Direct Purchase