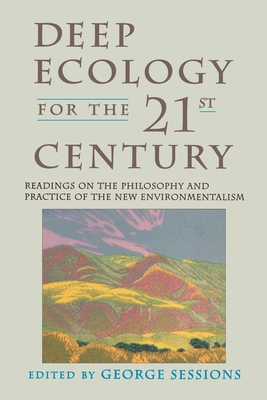 Deep Ecology for the Twenty-First Century

Readings on the Philosophy and Practice of the New Environmentalism

Every day, in newspapers and on television, we read and hear about the ongoing destruction of the environment: the greenhouse effect, ozone layer depletion, deforestation, and air and water pollution. Deep Ecology offers a solution to the environmental crisis through a radical shift in human consciousness—a fundamental change in the way people relate with the environment. Instead of thinking of nature as a resource to be used for human needs, Deep Ecology argues that the true value of nature is intrinsic and independent of its utility. Emerging in the 1980s as an influential philosophical, social, and political movement, Deep Ecology has shaped the environmental debate among leading activists and policymakers—from former Vice-President Al Gore to Dave Forman, cofounder of Earth First!

Deep Ecology for the Twenty-First Century contains thirty-nine articles by the leading writers and thinkers in the filed, offering a comprehensive array of perspectives on this new approach to environmentalism, exploring:

•  The basic philosophy of Deep Ecology.
•  Its roots in the writings of Henry David Thoreau, John Muir and Rachel Carson.
•  The relationship of Deep Ecology to social ecology, ecofeminism, the Greens, and New Age futurism.
•  How Deep Ecology as a way of life is exemplified by two important environmentalists: poet Gary Snyder and Norwegian philosopher Arne Naess.
•  The philosophical dimensions of this environmental movement by its leading theorist.
•  The politics of ecological sustainability and the social and political implications of Deep Ecology for the next century.

George Sessions is chairman of the philosophy department at Sierra College in Rocklin, California. He is the coauthor of Deep Ecology: Living As If Nature Mattered and coeditor of Environmental Philosophy.
Loading...
or support indie stores by buying on