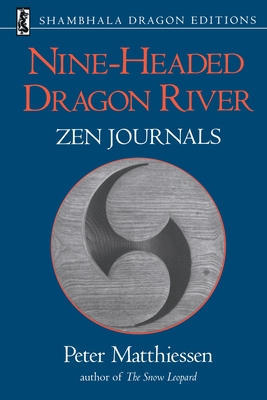 In August 1968, naturalist-explorer Peter Matthiessen returned from Africa to his home in Sagaponack, Long Island, to find three Zen masters in his driveway—guests of his wife, a new student of Zen. Thirteen years later, Matthiessen was ordained a Buddhist monk. Written in the same format as his best-selling The Snow Leopard, Nine-Headed Dragon River reveals Matthiessen's most daring adventure of all: the quest for his spiritual roots.

"Very few writers have the courage, inner experience, and literary technique to take us into the reaches of mystic awareness. Matthiessen has; his prose is among the finest of our time—at once sensual and austere, sinewy, yet full of warmth, eloquent yet reverent, polished clean by silence and awe. Nine-Headed Dragon River is a clear gift to us from a complex man who has schooled himself to speak of central things with a most honorable exactitude."—Andrew Harvey, Vogue

Peter Matthiessen, distinguished novelist, naturalist, journalist, and explorer, was born in New York City and has been a commercial fisherman and charterboat captain. He participated as a diver in the worldwide search for the great white shark that culminated in his book Blue Meridian and in the film Blue Water, White Death. His fiction includes Race Rock; Partisans; Raditzer; At Play in the Fields of the Lord, which was nominated for a National Book Award; and most recently Far Tortuga. His nonfiction includes The Tree Where Man Was Born, which was nominated for a National Book Award, The Snow Leopard, which won a National Book Award in 1979, and In the Spirit of Crazy Horse.
Loading...
or support indie stores by buying on