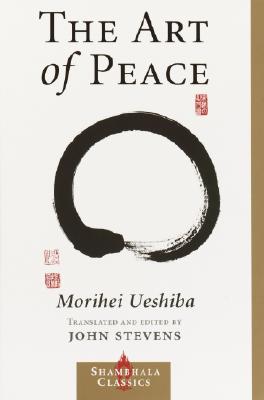 The Art of Peace

New York Times Bestseller The inspirational teachings in this collection show that the real way of the warrior is based on compassion, wisdom, fearlessness, and love of nature. The teachings are drawn from the talks and writings of Morihei Ueshiba, founder of the popular Japanese martial art of Aikido, a mind-body discipline he called the "Art of Peace," which offers a nonviolent way to victory in the face of conflict. Ueshiba believed that Aikido principles could be applied to all the challenges we face in life--in personal relationships, as we interact with society, and at work and in business. This edition is a much-expanded version of the original miniature edition that appeared in the Shambhala Pocket Classics series. It features a wealth of new material, including a biography of Ueshiba; an essay by John Stevens that presents Ueshiba's views on "The Art of War versus the Art of Peace"; newly translated doka, didactic "poems of the Way"; and Ueshiba's own calligraphies.

Morihei Ueshiba (1883-1969) was the founder of Aikido. At age eighteen, Ueshiba joined the Japanese military, during which time he also developed his skills in the martial arts. He eventually left the military, deeply discouraged by the death and destruction that results from combat. Ueshiba continued to experiment with a variety of martial arts, finding particular joy in the spiritual aspects of martial arts. He came to believe that a real warrior was one who was rooted in love, and it was in this spirit that he began to develop Aikido, a martial art that emphasizes harmony and the peaceful resolution of conflict.
Loading...
or
Not Currently Available for Direct Purchase