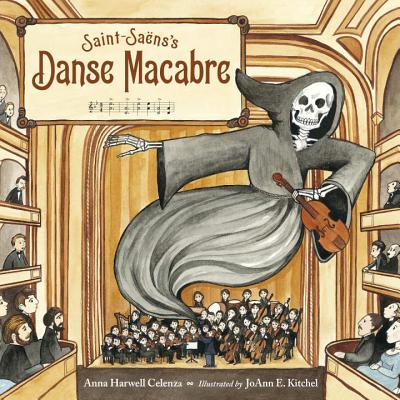 Camille Saint-Saens was a brilliant French composer from the nineteenth century. In SAINT-SAENS'S DANSE MACABRE, readers are transported to France in 1872 when Saint-Saens visited the catacombs beneath the streets of Paris, known best as the final resting place of victims of the French Revolution. It was in this underground graveyard that Camille found the inspiration to compose Danse macabre, his spooky, mischievous masterpiece.
Early performances of what would become Saint Saens's most well-known piece were met with brutal criticism. However, the composer paid the naysayers no mind to him, the choice of instrumentation perfectly captured his vision of dancing skeletons, of Maestro Death coming to life. A true story of creativity and belief in one's own ideas, SAINT-SAENS'S DANSE MACABRE will inspire the innovative thinker in all of us.
Back matter includes an author's note with a brief summary of the historical events and figures mentioned in the text. A CD recording of Danse macabre is also included.

Anna Harwell Celenza is a musicologist and the author of several books for adults and children regarding music history and the history of art. Her children s books include THE FAREWELL SYMPHONY, PICTURES AT AN EXHIBITION, GERSHWIN'S RHAPSODY IN BLUE, and VIVALDI'S FOUR SEASONS'. Anna lives in Baltimore, Maryland."
Loading...
or
Not Currently Available for Direct Purchase