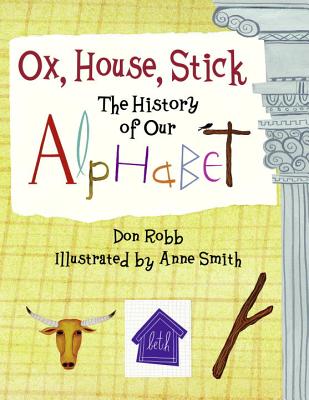 The History of Our Alphabet

Bold collage illustrations and clear prose trace the origins of our familiar letters. From the proto-Sinaitic peoples, through the Phoenicians, Greeks and Romans, this book follows the development of the Roman alphabet.

Includes sidebar information on punctuation, writing materials, the technology of printing, and more.

Don Robb began his second career in educational publishing after seven years as a teacher. After graduating from Ohio University in Athens, Ohio, where he studied history and political science, Don taught Spanish, French, and English as a second language at the high school level in Toledo, Ohio, then later at a junior high school in Hackensack, New Jersey.

His first job in publishing was as a foreign language consultant for Holt, Rinehart. He went on to serve in a variety of editorial and marketing capacities there, and at Houghton Mifflin Co., where he became a vice president. He left that position to join Charlesbridge (then Mastery Education Corporation) in 1981.

Don is an avid reader and a writer. His particular interests are history--especially American history--science non-fiction, and mysteries.
Loading...
or
Not Currently Available for Direct Purchase