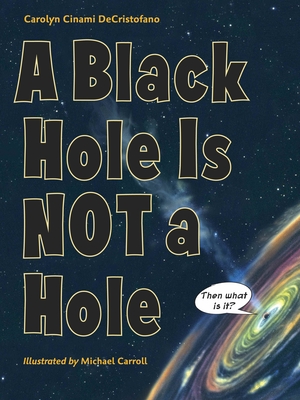 A Black Hole Is Not a Hole (Paperback)

Budding astronomers and scientists will love this humorous introduction to the extremely complex concept of black holes. With space facts and answers about the galaxies (ours, and others) A Black Hole is NOT a Hole takes readers on a ride that will stretch their minds around the phenomenon known as a black hole.

In lively and text, the book starts off with a thorough explanation of gravity and the role it plays in the formation of black holes. Paintings by Michael Carroll, coupled with real telescopic images, help readers visualize the facts and ideas presented in the text, such as how light bends, and what a supernova looks like.

Back matter includes a timeline which sums up important findings discussed throughout, while the glossary and index provide a quick point of reference for readers. Children and adults alike will learn a ton of spacey facts in this far-out book that’s sure to excite even the youngest of astrophiles.

Carolyn Cinami DeCristofano is the author of Leonardo's ABC's, as well as the acclaimed nonfiction middle grade read, A Black Hole Is Not a Hole. Aside from writing for children, Carolyn is also science educator and principal consultant with Blue Heron STEM Education. She has developed science programs with NASA and the Harvard-Smithsonian Center for Astrophysics. Carolyn lives in Boston, Massachusetts.

Internationally known artist Michael W. Carroll has been painting astronomical subjects for over 20 years. His art has appeared in several hundred magazines throughout the world, including Time, Smithsonian, National Geographic, and Astronomy. His paintings have aired on NOVA, COSMOS, and various TV specials, and have embellished albums and numerous books. Michael lives at the foot of the Rockies in Littleton, Colorado.

Praise For A Black Hole Is Not a Hole…

Oh, my stars! As the cover proclaims, a black hole may not be an actual hole, but readers will be glad they fell into this book. The volume guides readers on a (literally) out-of-this-world tour, dealing with topics and concepts that, in the hands of a less-gifted writer, might have remained obscure and unclear. DeCristofano handles the material with wit, style and singularly admirable clarity, frequently employing easy-to-understand and, yes, down-to-earth ideas and scenarios to help make complex principles comprehensible to readers of all ages. Carroll's illustrations, diagrams and charts, along with superb telescopic photographs (many courtesy of NASA) are splendid and filled with the drama and excitement of the limitless vastness of space. The handsome design and visuals greatly enhance the text and add much to readers' grasp of the subject. Stargazers will be entranced, and even those not especially attuned to matters celestial will come away feeling smarter, awestruck and with a sense of finally understanding this fascinating, other-worldly phenomenon. An excellent resource.
Hole-y astronomy!
—Kirkus Reviews, starred review

Writing with rare verve ("A black hole is nothing to look at. Literally."), DeCristofano condenses recent astronomical discoveries into a high energy account of what we know or guess about one of the universe's deepest and most unobservable secrets. Covering the life cycle of stars; the formation of black holes and weird optical and physical effects associated with them; more recent revelations of super-sized black holes at the centers of galaxies; and the general effects of mass on space, light, and matter, she presents a clear, well-rounded picture of the strange structure and stranger physics of black holes. After leading a wild ride over a black hole's event horizon ("Right away, you would need a new nickname--something like Stretch . . . .") and explaining theories about gravity from Newton's notions to "Einstein's Spacey Ideas," DeCristofano leaves readers to ponder the truth of her claim that a black hole isn't a hole--but "NOT exactly NOT a hole either." Enhanced by a time line and a generous set of further resources--and illustrated with plenty of cogent diagrams, space photographs, and Carroll's dramatic images of stellar whirlpools and mammoth jets of gas around cores of impenetrable blackness--this book will snatch readers from their orbits and fling them into a lasting fascination with nature's most attractive phenomena. Literally.
—Booklist, starred review
or support indie stores by buying on
Copyright © 2020 American Booksellers Association