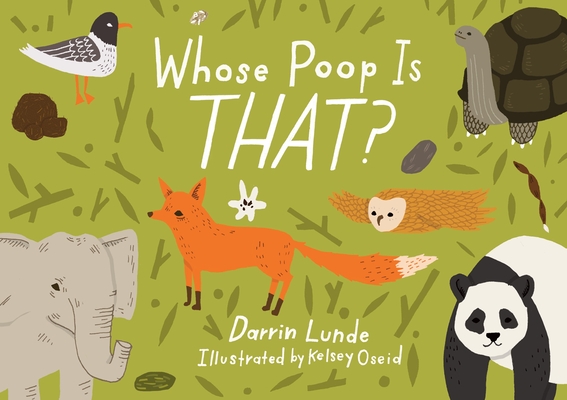 Whose Poop Is That? (Whose Is THAT?)

No, don’t say “Ewwww.” Ask, “Whose poop is that?” This simple, and yes, charming book asks this question about seven examples of animal poop. By investigating visual clues, young readers can learn to identify the animal through its droppings. For instance, find a sample of poop with bits of bone and tufts of hair. Turn the page to learn it came from a fox!

Kelsey Oseid’s illustrations are both accurate and beautiful. Backmatter includes further information about the poop and what scientists can learn from an animal’s droppings.


"A primer on poop and a guessing game, especially for those just beyond toilet training" — Kirkus Reviews

"Gross-out details will provoke glee...but kids will learn plenty about the variety and importance of animal waste, too" —Publisher's Weekly

"Sure to appeal to curious youngsters. Recommended for collections that can't get enough titles on poop" — School Library Journal

"The kid-friendly illustrations and matter-of-fact tone make this title an informative, rather than a gross-out, pick, though is certainly what will get kids reaching for the shelves" — Booklist

"What are you waiting for? Come get the “scoop on poop”!" — NSTA Recommends

Praise For Whose Poop Is That? (Whose Is THAT?)…

Owl pellets, coprolites, bird droppings, and honking big turds—whose waste is that?
Lunde uses a question-and-answer format to show how animal droppings vary and how they relate to animals' diets. This picture book may seem slight, covering only seven animals (fox, African elephant, panda, owl, Galápagos tortoise, gull, and the extinct ground sloth), but it reflects a careful choice of examples demonstrating the wide variety of animal diets, eating styles, and defecation habits. Four pages are devoted to each animal. The first double-page spread shows a series of footprints and a mysterious object, asks the title question (or a variant), and describes the object. The page turn reveals the animal, pictured in its habitat. A short paragraph tells why the poop contains what the readers see. Feces fans can find further information in two pages of backmatter, "The Scoop on Poop" and "Animal Poop Facts." Oseid's illustrations, done in pen and ink and colored digitally, have shadows suggesting the three-dimensionality of the droppings and pleasing, soothing color choices. For a younger audience than most recent titles about animal excrement, this might make a nice pair with Taro Gomi's classic Everyone Poops (2001).
A primer on poop and a guessing game, especially for those just beyond toilet training.
—Kirkus Reviews

Guess the poop! Repeating the question of the title, Lunde and Oseid ask readers to identify six kinds of animal scat (plus an owl pellet), providing images of the droppings, animal tracks, and brief descriptions as clues. "Whose poop is that? It has a bunch of splinters in it," Lunde asks, opposite what looks like a pile of pickles. The answer: a panda. "A panda eats mostly bamboo," he continues. "A panda has to spend most of its day eating in order to get enough energy." In unflashy, mixed-media artwork, Oseid highlights animals that include a red fox, African elephant, Galápagos tortoise, and gull, as well as their environments. Gross-out details will provoke glee ("A rabbit sometimes eats its poop in order to digest its food twice") but kids will learn plenty about the variety and importance of animal waste, too.
—Publishers Weekly

The can-you-guess format, so often put to engaging effect in science-focused picture books, works well here in an introductory brainteaser on animal droppings. Each bit of scat gets a four-page spread: the titular question, with animal tracks; the, ahem, main event, with a brief description (“It has bits of bone and a tuft of fur in it”); and a full-bleed spread with the animal and an explanation of how its poop came by its unique composition (“A red fox eats small mammals and birds. It crunches their bones and swallows their fur or feathers”). Though inconsistent scale and oversimplification of the footprints often put guessers at a disadvantage, pictures are sufficiently simplified and stylized to help viewers focus on the essentials. The succinct text, in slightly oversized sans serif font, makes this as accessible to newly independent readers as it is to younger listeners, and everyone with an interest in the unflushed will be intrigued by the back end matter (pun fully intended)—bullet- pointed “The Scoop on Poop” and “Animal Poop Facts.”
—BCCB Reviews

This picture book delivers exactly what its title promises—an examination of excrement, which also reveals a little something about the animal that left it behind. An opening two-page spread pairs the question "Whose poop is that?" with an illustration and description of a particular dropping. This sample might contain twigs and stems, old leaves, or bones and fur, for example. Once readers turn the page, the answer is revealed, along with some facts about the poop or the animal's diet. Whose poo is full of splinters? A panda's, due to its constant bamboo munching. Oseid's pen-and-ink illustrations are digitally colored, giving clear yet stylized renderings of the seven animals and droppings in question, including coprolite (fossilized dung) and one trick poop (what is it really?!). A final spread gives bulleted "Scoop on Poop" and "Animal Poop Facts" lists for more detailed information. The kid-friendly illustrations and matter-of-fact tone make this title an informative, rather than a gross-out, pick, though is certainly what will get kids reaching for the shelves.
—Booklist

Although animals in nature can most readily be identified by sight, evidence of their presence can also be found in the scat they leave behind. Lunde leverages children’s fascination with poop to introduce how these identifications are made. In a series of four-page sequences, the title question is asked: “Whose poop is that?” alongside a facing, up-close illustration of animal scat and a sentence pointing out key features. Turn the page, and the animal is revealed, along with brief additional information. For example: “Whose poop is that? / It has bits of bone and a tuft of fur in it. // A red fox’s. / A red fox eats small mammals and birds. It crunches their bones and swallows their fur or feathers.” Others include a panda, gull, and even the fossilized scat of the extinct ground sloth; one of the sequences breaks the pattern somewhat with a slightly different question (“Is that a poop?”) to feature a regurgitated owl pellet. Both the text and digitally colored pen-andink illustrations appear simpler than they are: they are accurate, and include just enough detail to highlight the keys to identification while remaining friendly and inviting to novice naturalists. A spread of additional bulleted facts is appended.
—The Horn Book

DUNG, DOO–DOO, SCAT, GUANO. However you say it, it’s all “poop”. But what’s so fascinating about it? Why are so many people intrigued about this natural process?   Utilizing carefully selected animals in a question–answer format, author Darrin Lunde challenges our animal droppings IQ in his latest book, Whose Poop is That?. Highlighting the animal’s diet using interesting facts, animal tracks, and visual clues, you can guess what the animal may be or just turn the page to find out. From one–foot–high poop, cubed–shaped poop, and the bird that makes a nest out of poop, it’s all gross, but cool! The scientific facts are presented in an engaging way for young readers to understand and want to know more about it. So what are you waiting for? Come get the “scoop on poop”!
—NSTA Recommends

Darrin Lunde is the collection manager in the Division of Mammals at the Smithsonian's National Museum of Natural History in Washington, D.C. He's written several books for children, including the Theodor Seuss Geisel Honor book Hello, Bumblebee Bat, as well as Hello, Baby Beluga, and Meet the Meerkat. Darrin lives near Washington, D.C.

Kelsey Oseid works in both traditional and digital mediums and often mixes the two to create her illustrations. This is her first book for young readers. Kelsey lives in Minneapolis, Minnesota.
Loading...
or
Not Currently Available for Direct Purchase