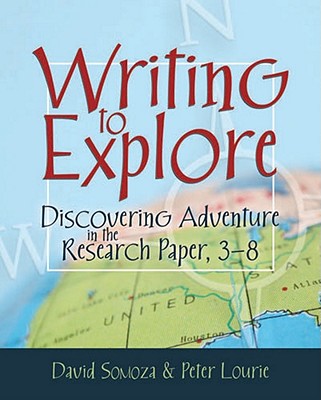 Discovering Adventure in the Research Paper, 3-8

In Writing to Explore, David and Peter demonstrate how to teach adventure writing, which integrates nonfiction and fiction and motivates students to write with imagination, curiosity, and a hunger to learn everything about their topic. The book starts with a solid foundation in the basics of good writing: setting descriptions, writing atmosphere, and character development. The authors then explore the specific elements of adventure writing—from setting the stage to conducting research; from combining history and geography to effectively utilizing technology. The result is an adventure-based paper that is “rooted in real places, supported by facts, and developed with detailed description of images from real locations.” Teachers will find handouts, sample activities, student writing examples, research sources, and tips to help them create a nonfiction writing program based around the adventure writing model. Research papers don’t have to be boring to read or to write. This book will show you how to get vibrant papers from your students—papers that teach both reader and writer something new.

Later in college, David spent a year abroad in Spain, where he got his first taste of teaching. After moving back and finishing his degree in architecture at the University of New Mexico, David worked in the architecture field for three years before deciding to make a change. He got a job as a substitute teacher in Albuquerque to see if he'd like it. He enjoyed it so much that he returned to school to become a teacher. He taught during the days and took classes at night.

After completing his degree, he taught for two years near Denver, Colorado before moving overseas to teach at international schools. For three years David taught in Brazil, where met his wife, Pam, who taught at the same school. Together they traveled throughout Brazil and fell in love with the beautiful country. Later they moved to Japan where they taught at another international school and again had many great opportunities to travel.

Eventually they moved back to the States, finding a home in Vermont. Here David taught fourth and fifth grade while Pam was home with their two boys. After several years they moved to New York to be closer to family.

Since then David has been teaching fifth grade in Burnt Hills, NY; he and his family live near Saratoga Springs. David loves teaching all subjects, but most enjoys teaching writing. He says, "Working with kids is always unpredictable, and that's the best part. If you give the kids parameters but let them go off and explore on their own, you never know what they'll come up with. This is particularly true with writing. Every time they write there's a chance that they'll create something new and beautiful. Even after all these years of teaching, I'm still blown away by their insight, their perspective, their creative use of language, and the genuine passion that comes out in their essays. At times, I think they even surprise themselves. It's often through their writing that I really get to know and understand my kids."

Peter's adventure books come directly from his travel journals. In order to write a book about a place - its history, geography, people and culture - he likes to experience it for himself. As a child, he loved collecting rocks and wandering the countryside of Connecticut. When his parents split up, he, his identical twin brother Jim, and their younger sister Ann moved to Ontario, Canada.

In the fourth grade, deep into the Hardy Boys, Peter wanted to be a bush pilot in Canada's Northwest Territories. He also wanted to be an archaeologist, to travel the world to delve into ancient cultures. When he graduated from New York University with a bachelor's degree in Classics, Peter studied early human bones with Margaret Leakey in Kenya and observed Colobus monkeys on the coast of Tanzania. He was all set to become an anthropologist when suddenly, while surveying monkeys in the jungles of Ecuador, Peter heard the mysterious story of an Incan treasure.

In 1533, seven hundred and fifty tons of gold were buried in a strange and haunting cloud forest in the Andes Mountains. That gold, in fact, is still hidden in a dangerous chain of misty mountains only seventy miles from Quito, the capital of Ecuador. It was this fantastic story (audio) that made Peter drop his plans to earn a Ph.D. in anthropology. And for the next five years, he remained in Ecuador to research the story of the Inca gold. Finally he hired three guides (Segundo, Juan and Washington) from the small village of El Triunfo in the cloud forest. He climbed into the high jungle looking for the gold but came back not with riches but with a desire to write an article for Highlights Magazine ("Inca Treausre in the Cloud Forest") and a book (Sweat of the Sun, Tears of the Moon: A Chronicle of an Incan Treasure).

So Peter began to write adventure-travel books about many places, rivers, and ancient cultures, both for children and for adults. His journeys have now taken him to remote parts of the world, including the jungles of Mexico, Bolivia, Brazil, Panama, Peru, and Africa.

A few years ago he realized a boyhood dream when he explored Tierra del Fuego at the tip of South America, known also as "El Fin del Mundo," or the End of the World. This remote island is located at the southern tip of Patagonia and was named "Land of Fire" by Ferdinand Magellan in 1520. Only seven hundred miles from Antarctica, it is a wild and desolate place, filled with penguins, sea lions, and wild guanaco, a llama-like creature that the natives there depended on for food and clothing.

For Peter, research is another word for exploration! It is Peter's love of mystery and of what he will discover that compels him toward his next adventure.  His most recent adventure biography, Jack London and the Klondike Gold Rush (Henry Holt, March 2017) will be followed by a second biography for Holt about Norwegian polar explorer Fridtjof Nansen: Locked in Ice! Nansen, the Fram, and the Daring Quest for the North Pole.  Peter has also been working with funding from the National Science Foundation on multimedia stories about the Arctic: www.arcticstories.net and www.icebreakerstories.com (this one about a month aboard Canada’s largest and oldest icebreaker in the Beaufort Sea). Peter holds a bachelor's degree in classics from New York University, a M.A. in English Literature from the University of Maine, and a M.F.A. in creative writing from Columbia University. He has taught writing at Columbia College, the University of Vermont, and Middlebury College.

He now makes his living traveling, writing and photographing, and visiting schools to share his adventures with students and teachers.

He and his family live near Middlebury, Vermont.