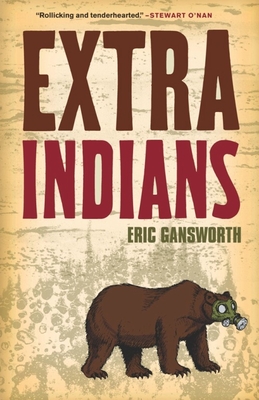 Every winter, Tommy Jack McMorsey watches the meteor showers in northern Minnesota. On the long haul from Texas to Minnesota, Tommy encounters a deluded Japanese tourist determined to find the buried ransom money from the movie Fargo. When the Japanese tourist dies of exposure in Tommy Jack's care, a media storm erupts and sets off a series of journeys into Tommy Jack's past as he remembers the horrors of Vietnam, a love affair, and the suicide of his closest friend, Fred Howkowski. Exploring with great insight and wit the ways images, stereotypes, and depictions intersect with, Extra Indians offers a powerful glimpse into contemporary Native American life.

"Exemplary. Gansworth delivers a messy and satisfying resolution. Longtime readers of Gansworth will recognize some characters from his previous work (Mending Skins; etc.), but the discoveries in this novel will delight new readers even more." Publishers Weekly, STARRED REVIEW

"Gansworth will surely garner comparisons to Sherman Alexie for his wry wit and compassionate voice, but his ability to dissect multiple hearts in a single pierce, his precise reconstruction of each lost soul into something new and pure, sets him apart. This is familial redemption at its finest, which is to say agonizingly complex and wholly engaging." Booklist

"Gansworth has given us a beautiful story of the intersection of truth and fiction, family and forgiveness, and the inability to forgive. A powerful story; highly recommended for readers of popular fiction." Library Journal

"In exploring who his characters believe they are versus who they may really be, Eric Gansworth says as much about the constitution of family and America as he does about the construction of identity and the world. Spanning the war in Vietnam, life on the rez, and the Coen Brothers' Fargo, Extra Indians is both rollicking and tenderhearted. Stewart O'Nan, author of Last Night at the Lobster and Songs for the Missing

"Gansworth's look at youthful folly and the damage that violence begets is fully drawn and beautifully written, almost ballad-like with its rueful tone." Minneapolis Star Tribune

"What seemingly begins as a road trip novel detours into a mysterious death and then comes around into a big-hearted novel about reservation life, the resonance of war even thirty years later, and the inescapability of one’s past." Time Out Chicago

"A literary novel carrying themes that possess more true-to-life tangible strength than verifiable facts. By layering truth and fiction, Gansworth complicates the two, dislocating us along with his characters." Philadelphia City Paper

"With an exacting eye for images and ear for language, novelist Eric Gansworth has constructed a rich tapestry of interwoven narratives that speak to the contemporary Native American experience, both on and off the reservation." Buffalo News