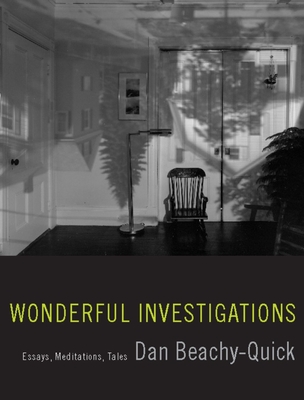 Over the course of six critically acclaimed books--including a compelling meditation on Moby-Dick--Dan Beachy-Quick has established himself as "one of America's most significant young poets" (Lyn Hejinian). In Wonderful Investigations, Beachy-Quick broaches "a hazy line, a faulty boundary" between our daily world and one rich with wonder; a magical world in which, through his work as a writer, Beachy-Quick participates with a singular combination of critical intelligence and lyricism. Touching on the works of Emerson, Thoreau, Proust, and Plato, among others, Beachy-Quick outlines the problem of duality in modern thought--the separation of the mind and body, word and referent, intelligence and mystery, human and natural--and makes the case for a fuller kind of nature poetry, one that strives to overcome this false separation, and to celebrate the notion that "wonder is the fact that the world has never ceased to be real."

"Dan Beachy-Quick's Wonderful Investigations juxtaposes four essays with three 'meditations' and four fable-like 'tales' to trace the tension between mind and body, between our inner and our outer lives. A poet, he is terrific with an image and relies on antecedents here from Plato to Thoreau to give his work a context and a depth."
David L. Ulin, Los Angeles Times

"This is a book about reading. It offers the kinds of insights into the act that most of us never stop to indulge in, and for that we are eternally grateful....The idea that reading offers a dream world, a parallel one, is familiar. But Beachy-Quick takes this a step farther. Reading before sleep, reading books to children before they go to sleep, is a way to slide gently through a middle place and into forgetting....try reading Beachy-Quick, who most certainly delivers perceptual fine-tuning."
Susan Salter Reynolds, Los Angeles Review of Books

"Wonderful Investigations is a model of intense observation, of a mind reaching out as far as it can. Always Beachy-Quick seems to write in metaphor, returning to the process of wonder, and why it’s so necessary, and then to the failure of language and poetry to ever truly take us where we want to go. And while I would normally tire of this recursive sort of exploration, I cannot turn away, returning to these essays because I long to feel as intensely curious about anything as Beachy-Quick does. This is the triumph of Wonderful Investigations: his reader cannot help but feel the same desire for that hazy linecannot help but want to reach for it as well."
Ploughshares

"'There is then creative writing as well as creative reading,' wrote Emerson in 'The American Scholar.' Poet and essayist Dan Beachy-Quick admits that this dictum is 'the touchstone of his creative life,' and it shows in his new prose collection Wonderful Investigations. An almost impossible task inspires this work: to stalk and capture states of wonder, while knowing that the quarry itself will evaporate if grasped too firmly with the tools of analysis. Literature provides the means to chart the hazy, yet distinct, border between the world of reality and the world of wonder, between hunger and mystery . . . Beachy-Quick's sensitive and intimate approach to writing about writing seems an ideal antidote to the post-whateverist malaise of most literary criticism. He acknowledges theory but doesn't get weighed down by it, nor is it his primary interest . . . In a landscape that at times seems overpopulated with creative writers, we need more creative readers like Beachy-Quick."
Justin Wadland, Rain Taxi

Praise for A Whaler's Dictionary:

This is a rich, profound, fascinating book, the kind that widens the margins of everything we read, making room for new observations, more creative relationships all around: writer/reader, person/book, literature/life.”Los Angeles Times

A supple and well-read poet with a fine ear, Beachy-Quick has long studiedsome might even say he has been obsessed withMoby-Dick.Often the whale, and the book, represent the endlessness of all quests, our enduring hunger for the right, last word. Jewish philosophy and wisdom literature (Martin Buber, Emmanuel Levinas), other famous modern thinkers (Wittgenstein, Derrida) and Shakespeare's King Lear also guide Beachy-Quick's thoughts, while the rhythms of not only Melville but Emerson and Thoreau guide his resonant prose.”Publishers Weekly

After immersing himself in Moby Dick for many years, poet and teacher Beachy-Quick found himself embarked on a mad task.” Following Ishmael’s lead, he has created a whaler’s dictionary.Beachy-Quick’s lyric and philosophical dictionary is also a browser’s delight, with see also lists that launch the reader on intriguing voyages into the realms of myth and archetype, the sea’s blue wilderness, and the uncharted waters of the collective unconscious.”Donna Seaman, Booklist

Wounded by a book, wounded by the force of idolatrous speech in Moby-Dick, Dan Beachy-Quick has mounted a kind of folly, a nautilus, enclosing the furtive wall of his own lyric sensibility. A Whaler's Dictionary reminds us why poets must sometimes measure their gifts against the calculus of prose, and why criticism by poets, unlike academic arguments, sometimes produces a flame which stands the test of time.”Daniel Tiffany, author of Toy Medium and Puppet Wardrobe

This is a major work on the charged relationship that can come into being between text and reader, written by one of America’s most significant young poets.”Lyn Hejinian, author of Saga/Circus and The Fatalist

A Whaler’s Dictionary manages to function as an oddly ideal work of criticism, breathing new life into Moby-Dick and showing how the novel subsists as an intricately living thing.”Virginia Quarterly Review

Dan Beachy-Quick is the author of four acclaimed collections of poems: North True South Bright (Alice James, 2003), Spell (Ahsahta, 2004), Mulberry (Tupelo, 2006), and, most recently, This Nest, Swift Passerine (Tupelo, 2009). In 2008, Milkweed Editions published his first work of nonfiction, A Whaler's Dictionary. He completed his MFA in poetry at the Iowa Writer's Workshop, and is the recipient of a Lannan Foundation residency among many other honors. Beachy-Quick previously taught in the Writing Program at the School of Art Institute of Chicago, and is currently an associate professor of English at Colorado State University.
Loading...
or support indie stores by buying on