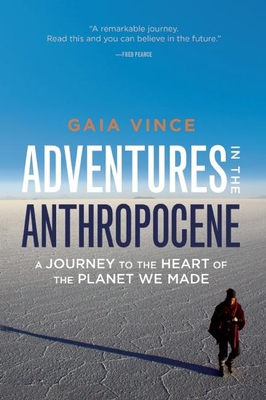 Adventures in the Anthropocene

A Journey to the Heart of the Planet We Made

We live in times of great change on Earth. In fact, while previous shifts from one geological epoch to another were caused by events beyond human control, the dramatic results of our emission of carbon to the atmosphere over the past century have moved many scientists to declare the dawn of a new era: the Anthropocene, or Age of Man. Watching this consensus develop from her seat as an editor at Nature, Gaia Vince couldn't help but wonder if the greatest cause of this dramatic planetary change--humans' singular ability to adapt and innovate--might also hold the key to our survival. And so she left her professional life in London and set out to travel the world in search of ordinary people making extraordinary changes and, in many cases, thriving. Part science journal, part travelogue, Adventures in the Anthropocene recounts Vince's journey, and introduces an essential new perspective on the future of life on Earth.

Gaia Vince is a journalist and broadcaster specializing in science and the environment. She has been the editor of the journal Nature Climate Change, the news editor of Nature and online editor of New Scientist. Her broadcast journalism has been featured on the BBC, and her writing has been published in the Guardian, Scientific American, and the Times, among many others. Currently, she writes a weekly online column about the natural world and our place in it for the American Scholar. A native of Australia, she resides in London.
Loading...
or
Not Currently Available for Direct Purchase