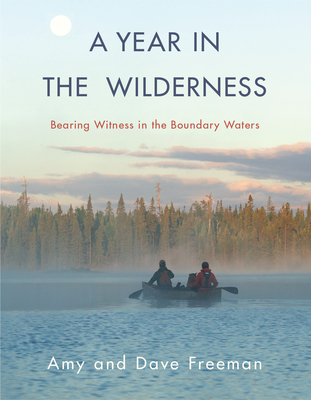 A Year in the Wilderness

Bearing Witness in the Boundary Waters

Since its establishment as a federally protected wilderness in 1964, the Boundary Waters has become one of our nation's most valuable--and most frequently visited--natural treasures. When Amy and Dave Freeman learned of toxic mining proposed within the area's watershed, they decided to take action--by spending a year in the wilderness, and sharing their experience through video, photos, and blogs with an audience of hundreds of thousands of concerned citizens.

This book tells the deeper story of their adventure in northern Minnesota: of loons whistling under a moonrise, of ice booming as it forms and cracks, of a moose and her calf swimming across a misty lake.

With the magic--and urgent--message that has rallied an international audience to the campaign to save the Boundary Waters, A Year in the Wilderness is a rousing cry of witness activism, and a stunning tribute to this singularly beautiful region.

Dave and Amy Freeman's expeditions have taken them over thirty thousand miles by canoe, kayak, and dogsled through some of the world's wildest places, from the Amazon to the Arctic. National Geographic named the Dave and Amy Adventurers of the Year in 2014 and their images, videos, and articles have been published by a wide range of media sources from the CBC, NBC, and FOX to the Chicago Tribune, National Geographic, Outside, Backpacker, Canoe and Kayak, and Minnesota Public Radio.
Loading...
or support indie stores by buying on