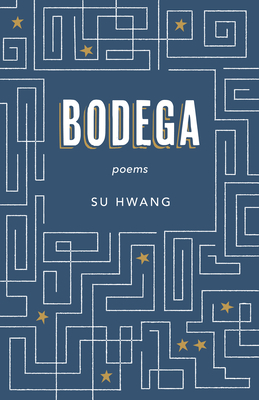 Winner of the 2020 Minnesota Book Award in Poetry

Against the backdrop of the war on drugs and the 1992 Los Angeles Riots, a Korean girl comes of age in her parents' bodega in the Queensbridge projects, offering a singular perspective on our nation of immigrants and the tensions pulsing in the margins where they live and work.

In Su Hwang's rich lyrical and narrative poetics, the bodega and its surrounding neighborhoods are cast not as mere setting, but as an ecosystem of human interactions where a dollar passed from one stranger to another is an act of peaceful revolution, and desperate acts of violence are "the price / of doing business in the projects where we / were trapped inside human cages--binding us / in a strange circus where atoms of haves / and have-nots always forcefully collide." These poems also reveal stark contrasts in the domestic lives of immigrants, as the speaker's own family must navigate the many personal, cultural, and generational chasms that arise from having to assume a hyphenated identity--lending a voice to the traumatic toll invisibility, assimilation, and sacrifice take on so many pursuing the American Dream.

"We each suffer alone in / tandem," Hwang declares, but in Bodega, she has written an antidote to this solitary hurt--an incisive poetic debut that acknowledges and gives shape to anguish as much as it cherishes human life, suggesting frameworks for how we might collectively move forward with awareness and compassion.

Su Hwang is a poet, activist, stargazer, and the author of Bodega, which received the 2020 Minnesota Book Award in poetry and was named a finalist for the 2021 Kate Tufts Discovery Award. Born in Seoul, Korea, she was raised in New York then called the Bay Area home before transplanting to the Midwest, where she received her MFA from the University of Minnesota. A recipient of the inaugural Jerome Hill Fellowship in Literature, among other honors, she is a teaching artist with the Minnesota Prison Writing Workshop and is the cofounder, with poet Sun Yung Shin, of Poetry Asylum. She currently lives in Minneapolis.
Loading...
or support indie stores by buying on