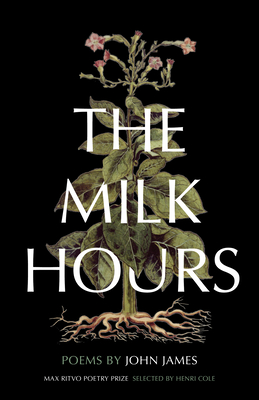 Winner of the Max Ritvo Poetry Prize, The Milk Hours is an elegant debut that searches widely to ask what it means to exist in a state of loss. "We lived overlooking the walls overlooking the cemetery." So begins the title poem of this collection, whose recursive temporality is filled with living, grieving things, punctuated by an unseen world of roots, bodies, and concealed histories. Like a cemetery, too, The Milk Hours sets unlikely neighbors alongside each other: Hegel and Murakami, Melville and the Persian astronomer al-Sufi, enacting a transhistorical poetics even as it brims with intimacy. These are poems of frequent swerves and transformations, which never stray far from an engagement with science, geography, art, and aesthetics, nor from the dream logic that motivates their incessant investigations. While John James begins with the biographical--the haunting loss of a father in childhood, the exhausted hours of early fatherhood--the questions that emerge from his poetic synthesis are both timely and universal: what is it to be human in an era where nature and culture have fused? To live in a time of political and environmental upheaval, of both personal and public loss? How do we make meaning, and to whom--or what--do we turn, when such boundaries so radically collapse?

John James is the author of Chthonic, winner of the 2014 CutBank Chapbook Award. His poems appear in Boston Review, Kenyon Review, Gulf Coast, Poetry Northwest, Best American Poetry 2017, and elsewhere. Also a digital collagist, his visual art is forthcoming in the Adroit Journal, Quarterly West, and LIT. He lives in the San Francisco Bay Area, where he is pursuing a PhD in English at the University of California, Berkeley.
Loading...
or support indie stores by buying on