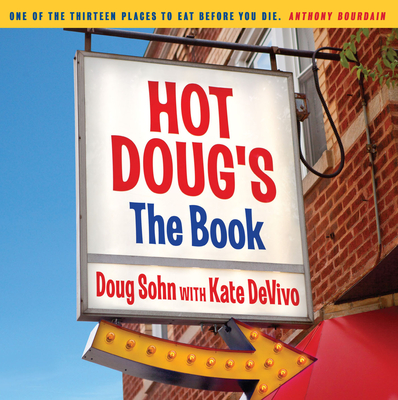 When it comes to hot dogs, Hot Doug's head chef Doug Sohn is the master of the craft. His introduction of gourmet ingredients and professionally trained culinary flair to the world of encased meats has earned him national recognition and praise. In Hot Doug's: The Book, Sohn takes the reader on a fun, irreverent trip through the history of hot dogs, his restaurant, and the many patrons -- both famous and average Joe -- who have declared Sohn the king of dogs. As told through Sohn's own stories, this book will combine photos, favorite anecdotes, lessons learned, and lists ranging from general restaurant etiquette to most-repeated sausage double-entendres (Doug's heard 'em all). Stories included will reveal fact from the folklore of the restaurant's founding, retell the tale of Hot Doug's infamous 2006 run-in with Chicago City Hall, and even provide accounts of Hot Doug's-inspired tattoos, which if presented upon order privilege the bearer to free hot dogs for life. Contributions from some of Hot Doug's biggest fans will be spread throughout the book, with raves from Paul Kahan, Steve Albini, Dan Sinker, Mindy Segal, Homaro Cantu, Aziz Ansari, many other local and national figures, and an introduction from Graham Elliot.

Chef Graham Elliot is an award-winning chef and owner of three Chicago restaurants: Grahamwich, g.e.b., and Graham Elliot, which recently received Michelin's two-star designation. He has appeared on the popular television shows "Iron Chef," "Top Chef Masters," and as a co-star alongside Gordon Ramsay and Joe Bastianich in the FOX series "MasterChef." He is a regular contributor on Access Hollywood, Nightline, Good Morning America, and The Today Show, among others. He lives in Chicago with his wife, Allie, and his three children.
Loading...
or
Not Currently Available for Direct Purchase