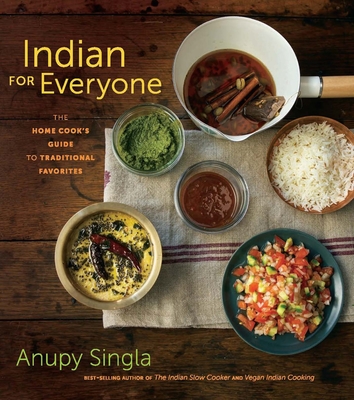 Indian for Everyone (Hardcover)

"An impressive and useful addition to the canon." --Publishers Weekly, starred review "Only have room for one go-to book for Indian home cooking on your shelf? This is it." --Booklist Indian for Everyone is the third book by Anupy Singla, by far her most stunning and comprehensive offering yet. Singla is America's favorite authority on Indian home cooking, and her expertise with delicious, healthful recipes has endeared her to fans everywhere. This new book opens up the true simplicity and flavor of Indian food for anyone, regardless of dietary restrictions or familiarity. Singla's recipes feature popular favorites, regional specialties, and--unlike any other Indian cookbook--alternative preparation styles for every recipe. Included are quick-and-easy adaptations for making a meal vegetarian, vegan, or gluten-free, or even in the slow cooker. Beginners appreciate the book's step-by-step instructions, while veteran home cooks now have a reference point for family favorites, including little-known instructions and standard cook times. With deeply personal, detailed stories behind these recipes, readers see how healthy cooking connected Singla's family through many generations and disparate cultural heritages. More than the next great Indian cookbook, this is the next great American cookbook -- sure to become a staple of every family's collection.

Anupy Singla is the author of the best-selling titles, The Indian Slow Cooker (Agate Surrey, 2010) and Vegan Indian Cooking (Agate Surrey, 2012), both of which have been the top-selling Indian cookbooks since their release. She is the founder and CEO of Indian as Apple Pie, her company that creates and sells custom spice blends as well as unique homegoods. Singla blogs at IndianASapplepie.com, and her writing has been featured in many print and online outlets. She formerly worked as an on-air TV reporter and anchor for CLTV News, the cable arm of the Tribune Company broadcasting and sister station to Chicago's WGN-TV, and for Bloomberg TV. Her books have been praised in Better Homes & Gardens, Good Housekeeping, and the Wall Street Journal. Singla lives with her husband and two young daughters in Chicago, IL.
or
Not Currently Available for Direct Purchase
Copyright © 2020 American Booksellers Association