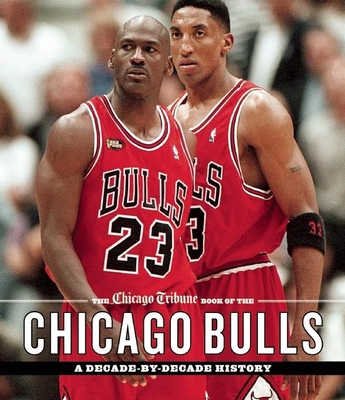 The Chicago Tribune Book of the Chicago Bulls (Hardcover)

The Chicago Bulls, one of the NBA's most storied and valuable franchises, have been building their highly decorated legacy for five decades. To this day, the Bulls are one of the most popular teams the world over. Six championships and the eternal legacy of Michael Jordan--perhaps the greatest player of all time--will do that, and Bulls fans wouldn't have it any other way. Published to commemorate the team's 50th anniversary, The Chicago Tribune Book of the Chicago Bulls is a decade-by-decade look at the pride of Chicago's West Side. Curated by the Chicago Tribune sports department, this book documents every era in the team's history through the newspaper's original reporting, in-depth analysis, interviews, and archival photos. Comprehensive timelines, rankings of top players by position, and profiles on key coaches, Hall of Famers, and MVPs provide an entertaining, blow-by-blow look at the team's greatest successes and most dramatic moments. A first-of-its-kind collector's item, The Chicago Tribune Book of the Chicago Bulls is a tour through basketball history produced by the award-winning journalists who have been documenting their home team since the beginning.

The Chicago Tribune, founded in 1847, is the flagship newspaper of the Tribune Company. Its staff comprises dedicated, award-winning journalists who have authored many best-selling books.
or support indie stores by buying on
Copyright © 2020 American Booksellers Association