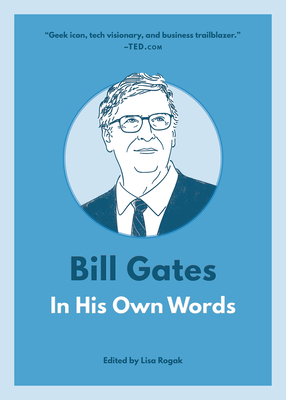 In His Own Words (In Their Own Words)

Get inside the head of one of the most important leaders of our time with this collection of quotes from--global business icon and philanthropist Bill Gates, the co-founder and former CEO of Microsoft. After founding Microsoft in 1975, Bill Gates took the software industry by storm. Today, Microsoft has become one of the largest technology companies in the world--boasting a market capitalization of more than $1.6 trillion. From the Windows operating system to Microsoft Office Suite, Gates and his team forever changed the way people use computers--and ultimately planted the seeds of a global technology revolution in the process. Gates has long been ranked as one of the world's wealthiest men--which gave him a name recognition far greater than that of most CEOs--and businesspeople of all stripes have looked to him as a role model, using his words and business strategies to help create, inspire, and grow their own companies. After he stopped running Microsoft's day-to-day operations in 2008 to devote himself full-time to the Bill & Melinda Gates Foundation, a kinder, gentler Gates began to emerge. In stark contrast to the implacable reputation Gates earned as a CEO, as a philanthropist, Gates has helped to change the lives of millions of people worldwide. In technology, in business, and now, in philanthropy, Gates has proven himself to be one of the most influential people of our time. Bill Gates's second act is no less compelling than his first. This collection of quotes provides an inside look into the inner workings of one of the most revered, and occasionally controversial, business icons of the past four decades. And whether you're interested in his personal life or looking for inspiration to drive you forward in your own business endeavors, Bill Gates: In His Own Words has much to offer. As the tech giants who distinguished the turn of the 21st century shape public life in ways that outstrip the previous century's titans of industry, we look to figures like Gates for inspiration. Now updated, expanded, and redesigned since its original publication in 2012 as Impatient Optimist: Bill Gates In His Own Words, you can find Gates's most inspirational, thought-provoking quotes in one place.

Lisa Rogak is a New York Times best-selling author whose books have been published in more than two dozen languages. She lives in Berkeley, CA.
Loading...
or support indie stores by buying on