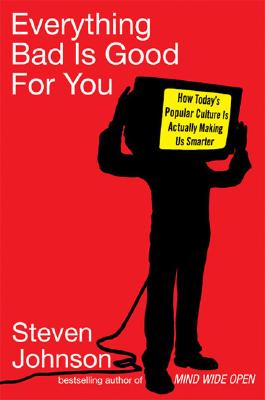 Everything Bad is Good for You

From the author of the New York Times bestseller Mind Wide Open comes a groundbreaking assessment of popular culture as it's never been considered before: through the lens of intelligence.

Drawing from fields as diverse as neuroscience, economics, and literary theory, Johnson argues that the junk culture we're so eager to dismiss is in fact making us more intelligent. A video game will never be a book, Johnson acknowledges, nor should it aspire to be-and, in fact, video games, from Tetris to The Sims to Grand Theft Auto, have been shown to raise IQ scores and develop cognitive abilities that can't be learned from books. Likewise, successful television, when examined closely and taken seriously, reveals surprising narrative sophistication and intellectual demands.

Startling, provocative, and endlessly engaging, Everything Bad Is Good for You is a hopeful and spirited account of contemporary culture. Elegantly and convincingly, Johnson demonstrates that our culture is not declining but changing-in exciting and stimulating ways we'd do well to understand. You will never regard the glow of the video game or television screen the same way again.

Steven Johnson is the author of the national bestsellers "Everything Bad Is Good for You" and "Mind Wide Open: Your Brain and the Neuroscience of Everyday Life," as well as "Emergence: The Connected Lives of Ants, Brains, Cities, and Software" and "Interface Culture: How New Technology Transforms the Way We Create and Communicate."
Loading...
or
Not Currently Available for Direct Purchase