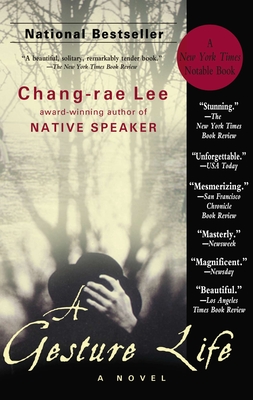 His remarkable debut novel was called "rapturous" (The New York Times Book Review), "revelatory" (Vogue), and "wholly innovative" (Kirkus Reviews). It was the recipient of six major awards, including the prestigious Hemingway Foundation/PEN award. Now Chang-rae Lee has written a powerful and beautifully crafted second novel that leaves no doubt about the extraordinary depth and range of his talent.

A Gesture Life is the story of a proper man, an upstanding citizen who has come to epitomize the decorous values of his New York suburban town. Courteous, honest, hardworking, and impenetrable, Franklin Hata, a Japanese man of Korean birth, is careful never to overstep his boundaries and to make his neighbors comfortable in his presence. Yet as his story unfolds, precipitated by the small events surrounding him, we see his life begin to unravel. Gradually we learn the mystery that has shaped the core of his being: his terrible, forbidden love for a young Korean Comfort Woman when he served as a medic in the Japanese army during World War II.

In A Gesture Life, Chang-rae Lee leads us with dazzling control through a taut, suspenseful story about love, family, and community—and the secrets we harbor. As in Native Speaker, he writes of the ways outsiders conform in order to survive and the price they pay for doing so. It is a haunting, breathtaking display of talent by an acclaimed young author.

Praise For A Gesture Life: A Novel…

"A Gesture Life is the touching, multilayered rumination of an uneasy psyche. It is also a tragic, horrifying page-turner, whose evocation of wartime victims is unforgettable...A deeply involving tale, no less so because we realize, almost from the first chapter, that we can't trust Hata's version of events. [Lee] enlists the reader's full energies to interpret this enigmatic speaker, who saddens, baffles and unfuriates us all at once."—Chicago Tribune

"Once again, this gifted young author has given us a beautifully tapestried story of seeking identity and acceptance in another culture while remaining separate from the tug of it."—The Christian Science Monitor

"Lee elegantly creates suspense out of the seemingly static story of a man trying hard not to feel. He has written a wise and humane novel that both amplifies the themes of identity and exile he addressed in Native Speaker, and creates a wonderfully resonant portrait of a man caught between two cultures and two lives."—Michiko Kakutani, The New York Times

Chang-rae Lee is the author of Native Speaker, winner of the Hemingway Foundation/PEN Award for first fiction, A Gesture Life, Aloft, and The Surrendered, winner of the Dayton Peace Prize and a finalist for the Pulitzer Prize. Selected by The New Yorker as one of the twenty best writers under forty, Chang-rae Lee teaches writing at Princeton University.
Loading...
or support indie stores by buying on