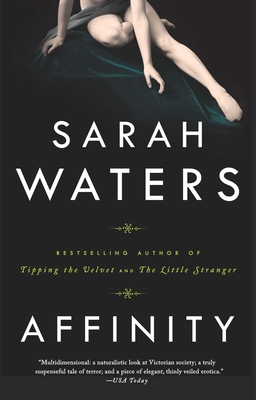 An upper-class woman recovering from a suicide attempt, Margaret Prior has begun visiting the women’s ward of Millbank prison, Victorian London’s grimmest jail, as part of her rehabilitative charity work. Amongst Millbank’s murderers and common thieves, Margaret finds herself increasingly fascinated by on apparently innocent inmate, the enigmatic spiritualist Selina Dawes. Selina was imprisoned after a séance she was conducting went horribly awry, leaving an elderly matron dead and a young woman deeply disturbed. Although initially skeptical of Selina’s gifts, Margaret is soon drawn into a twilight world of ghosts and shadows, unruly spirits and unseemly passions, until she is at last driven to concoct a desperate plot to secure Selina’s freedom, and her own.

As in her noteworthy deput, Tipping the Velvet, Sarah Waters brilliantly evokes the sights and smells of a moody and beguiling nineteenth-century London, and proves herself yet again a storyteller, in the words of the New York Times Book Review, of "startling power."

“Unfolds sinuously and ominously…a powerful plot-twister…a truly suspenseful tale of terror; and a piece of elegant, thinly veiled erotica. Like a Ouija board, Affinity offers different messages to different readers, scaring the shrouds off everyone in the process.”
—USA Today

“[Waters] displays her incredible talent for the Gothic historical novel in this splendid book about a Victorian women’s prison and the affair there between an inmate and a ‘lady visitor.’”
—San Francisco Chronicle

Sarah Waters is the New York Times–bestselling author of The Paying Guests, The Little Stranger,The Night Watch, Fingersmith, Affinity, and Tipping the Velvet. She has three times been short-listed for the Man Booker Prize, has twice been a finalist for the Orange Prize, and was named one of Granta’s best young British novelists, among other distinctions. Waters lives in London.
Loading...
or
Not Currently Available for Direct Purchase