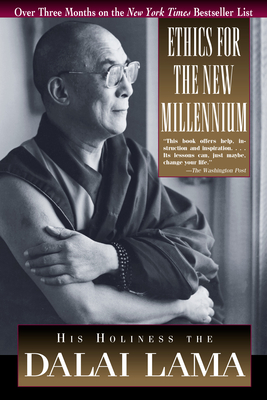 Ethics for the New Millennium

Don't miss His Holiness the Dalai Lama's classic book, The Art of Happiness, or his newest, The Book of Joy, named one of Oprah's Favorite Things.

In a difficult, uncertain time, it takes a person of great courage, such as the Dalai Lama, to give us hope. Regardless of the violence and cynicism we see on television and read about in the news, there is an argument to be made for basic human goodness. The number of people who spend their lives engaged in violence and dishonesty is tiny compared to the vast majority who would wish others only well. According to the Dalai Lama, our survival has depended and will continue to depend on our basic goodness. Ethics for the New Millennium presents a moral system based on universal rather than religious principles. Its ultimate goal is happiness for every individual, irrespective of religious beliefs. Though he himself a practicing Buddhist, the Dalai Lama's teachings and the moral compass that guides him can lead each and every one of us—Muslim, Christian, Jew, Buddhist, or atheist—to a happier, more fulfilling life.

Praise For Ethics for the New Millennium…

"Like any good teacher, he understands that ethical matters are individual matters, that an ethical society is only the sum of its ethical citizens. We must repair our own hearts and actions, then work with our family, our neighborhood, our city, our state and nation, and on to the interrelated world…This book offers help, instruction and inspiration along the way. Its lessons can, just maybe, change your life." —The Washington Post

"Good stuff about having the right stuff... After the Me Generation and decades of cynicism, the Dalai Lama's optimism and courage may be just what the twenty-first century needs." —The San Diego Union-Tribune

"The Dalai Lama illustrates his argument with examples from his extraordinary life, showing the same humility and gentle self-deprecation that make him such a popular speaker and spiritual leader." —San Francisco Chronicle

"Ethics for the New Millennium not only points to a valuable goal, it also urges us to take the first step in the direction of right action. The Dalai Lama does not merely preach compassion--he is compassionate, and his book is a generous gift to a very needy world." —Arkansas Democrat-Gazette

“As His Holiness himself says, very little in this book is original. But his message is so often neglected that it sounds very fresh indeed. Simple but not simplistic.” —Kirkus Reviews

“On paper… the Dalai Lama is a living incarnation of a Buddha, the hierarch of a government in exile, and a doctor in metaphysics. Yet the single most extraordinary thing about him may be simply his sturdy, unassuming humanity.” —Pico Iyer

“Although claiming to be only a simple human being, he is  known the world over as a tireless worker for peace, a great spiritual teacher, and a man with a gift for conveying great truths in a manner accessible to all. His combination of genuine warmth, infectious sense of humor, penetrating intellect, and disarming humility have won him many friends and admirers throughout the world.” —Senator Claiborne Pell

Tenzin Gyatso, His Holiness the Fourteenth Dalai Lama, is the spiritual and temporal leader of the Tibetan people. His tireless efforts on behalf of human rights and world peace have brought him international recognition. He is the recipient of the Wallenberg Award (conferred by the U.S. Congressional Human Rights Foundation), the Albert Schweitzer Award, and the Nobel Peace Prize.
Loading...
or support indie stores by buying on