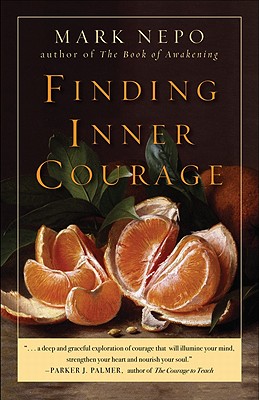 Mark Nepo has been interviewed by Oprah on her Soul Series radio network and his The Book of the Awakening has been featured in O, The Oprah magazine and on the Oprah TV show. In this book, Mark invites readers to explore their own inner core through the stories of ordinary people, political activists, artists, spiritual teachers from a variety of traditions. These are people who have faced themselves, their warts and weaknesses. They have stood by the courage of their convictions in all kinds of moments, great and small.

Nepo's insights and commentary are spot on, and help readers relate the stories of others to their own lives. The book is divided into three sectionsfinding our inner core, standing by our inner core, and sustaining the practice of living from that place. Each of the nearly 60 brief essays and stories elucidates and inspires. Nepo's broad range of stories and people, of traditions and insights, offers myriad ways for readers to relate to their own search for courage.

The late Howard Zinn said of this book, "A poetic, profoundly thoughtful rumination on how we might live."

Mark Nepo is a poet and philosopher who has taught in the fields of poetry and spirituality for forty years. A New York Times #1 bestselling author, he has published twenty-two books and recorded fourteen audio projects. Recent work includes: The Book of Soul (2020) recently honored by Spirituality & Practice as one of the Best Spiritual Books of 2020, Drinking from the River of Light (2019), a Nautilus Book Award Winner; More Together Than Alone (2018) cited by Spirituality & Practice as one of the Best Spiritual Books of 2018; and Things That Join the Sea and the Sky (2017), a Nautilus Book Award Winner, The One Life We're Given (2017), The Way Under the Way (2016), Inside the Miracle (2015), The Endless Practice (2014), Reduced to Joy (2013), Seven Thousand Ways to Listen, which won the 2012 Books for a Better Life Award, Staying Awake (2012), Holding Nothing Back (2012), As Far As the Heart Can See (2011), and Surviving Has Made Me Crazy (2007), as well as many audio books including The Book of Awakening, Finding Inner Courage, and As Far As the Heart Can See (2011). As a cancer survivor, Mark devotes his writing and teaching to the journey of inner transformation and the life of relationship. Mark was given a Life-Achievement Award by AgeNation in 2015; in 2016 he was named by Watkins: Mind Body Spirit as one of the 100 Most Spiritually Influential Living People, and was also chosen as one of OWN’s SuperSoul 100, a group of inspired leaders using their gifts and voices to elevate humanity. In 2014 Mark was part of  Oprah Winfrey’s The Life You Want Tour, and has appeared several times on her Super Soul Sunday program on OWN TV. He has also been interviewed by Robin Roberts on Good Morning America about his New York Times bestseller The Book of Awakening. Mark is a regular columnist for Spirituality & Health Magazine.

The Exquisite Risk was cited by Spirituality & Practice as one of the Best Spiritual Books of 2005, calling it “one of the best books we’ve ever read on what it takes to live an authentic life.” Mark’s collected essays appear in Unlearning Back to God: Essays on Inwardness. Other books of poetry include Suite for the Living (2004), Inhabiting Wonder (2004), Acre of Light (1994), Fire Without Witness (1988), and God, the Maker of the Bed, and the Painter (1988). His work has been translated into more than twenty languages. In leading spiritual retreats, in working with healing and medical communities, and in his teaching as a poet, Mark’s work is widely accessible and used by many. He continues to offer readings, lectures, and retreats. Please visit Mark at: Live.MarkNepo.com, MarkNepo.com, ThreeIntentions.com or WMESpeakers.com.  (wmespeakers.com/speaker/mark-nepo)