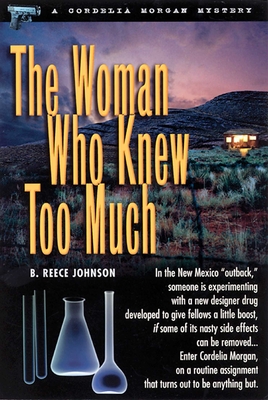 Woman Who Knew Too Much

In the New Mexico "outback," someone is experimenting with a new designer drug developed to give fellows a little boost, if some of its nasty side effects can be removed. Enter Cordelia Morgan, on a routine assignment that turns out to be anything but. Jet Butler has lived on an isolated mesa for more than twenty years ever since her feminist bestseller indirectly caused the deaths of eighty-three women and children living in a commune during an FBI-bungled siege. Now her best friend and next-door neighbor, Kit, is the prime suspect in the murder of a local recluse, a man Jet ranks as the single most unlikeable human being she's ever met. Enter Cord Morgan. She's a hit artist for The Company, an international "contracting" firm. Morgan is a few years past the ten-year limit prescribed for her line of work. The Company, sensing the beginning of a crack or two, gives her an easy vacation assignment in rural New Mexico. But when she meets up with Jet Butler, her facade really begins to crack and Cordelia Morgan finds herself on the run.