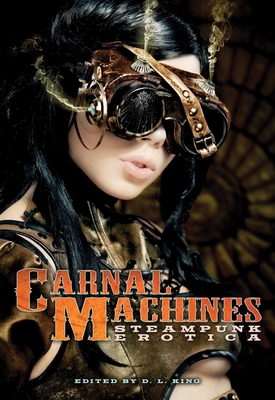 The Victorians wrote some of the best and most enduring erotica. For such a tightly-laced age, people spent a lot of time thinking about things carnal. Jules Verne, Sir Arthur Conan Doyle, Mary Shelley, H.G. Wells, et al enthralled us with their visions of new possibilities. The rich and slightly decadent visuals of the steam age lend themselves perfectly to the new carnality of post-punk era. And, of course, what is repressed will be even more exciting once the corset is unlaced. Steampunk, even without sex, is erotic; with sex, it's over-the-top hot. A widowed lady engineer invents a small device that can store the energy from sexual frustration and convert it to electricity to help power a home. Teresa Noelle Roberts shows us what it can do, confronted with sexual fulfillment. What volume of steampunk would be complete without a tale of sailing ships and the men who sail them? If your taste runs to sexy pirates in space, Poe Von Page will delight you with the mutinous crew of the Danika Blue and their new captain.

Then there's the very special room on the top floor in the House of the Sable Locks, a brothel where sexually discriminating men go to have their fantasies fulfilled. Even if a man daren't put those fantasies into words, Elizabeth Schechter's "Succubus" will give the madam all the information she needs with which to make her clients happy. There are brothels, flying machines, steam-powered conveyances, manor houses, spiritualist societies. The following stories afford intelligently written, beautifully crafted glimpses into other worlds, where the Carnal Machines won't fail to seduce you, get you wet or make you hard so, lie back, relax; a happy ending is guaranteed.

"This captivating collection has everything I look for in outstanding erotica; rich atmospheric settings, interesting, intelligent characters, well-crafted storylines, and the playful but always cerebrally surprising use of language." --Erotica for the Big Brain

"An inventive, sexy twist on an up-and-coming genre."
"Hot, Victorian repression being let loose on every page."
"Harnessing a young man's libido to power the house--brilliant." --Independent Publisher Awards Judges, 2012

"It is hard to review an anthology, because you might not like all the stories equally or all the authors equally enough to give a rating. However, I loved all the stories in this book, which uses modern technology in some form or other in each story. It may not be modern as we know it, but with the machines built for pleasure seeking Victorian era prudishness, we see Queen Victoria couldn't hold back sensuality and sexuality as much as most people might have wished or believed. Carnal Machines is a great collection of stories, with widely varied ideas from widely varied authors. I think you will enjoy it." --Manic Readers

"It's a really good fun, well written anthology which is completely different to anything I've ever read before. [...] if you're looking for something sexy and very different, look no further. Carnal Machines is a decadent and unique read that's well worth adding to your to be read list." --Lucy Felthouse for Erotica for All.co.uk

"So, if you're looking something sexy and very different, look no further. Carnal Machines is a decadent and unique read that's well worth adding to your to be read list." --Blogcritics

"Carnal Machines is a wonderful exploration of erotica in the Steampunk genre. I've read a fair amount of Steampunk erotica and this book, edited by D L King, is one of the best out there. The stories all embody the genre perfectly. Each one shines as a glimpse into a Victorian world that might have been if things had gone just a wee bit differently and in some cases magically. The characters and worlds of the various authors pull you in so well it's a shock when the story ends. You don't want to let go, you want to continue on and find out what else happens in these worlds. As I mentioned, I've read a lot of Steampunk erotica and most fail to catch the feel or the atmosphere of the genre. Carnal Machines nails it, this is what Steampunk erotica should be. This is definitely a book for the keeper shelf and one to read over and over with your favorite Airship Pirate or Mad Scientist. This one gets a 5 and a recommended read." --Night Owl Reviews

"It would be easy to get lost in the devices of this ersatz era - they could so easily steal the show - but it is that the tales don't do this that makes the collection shine. I'm a firm believer in the strength of narrative in erotica, and it's obvious the authors in this anthology are cut from similar cloth. The devices are indeed carnal, but it's the characters who take you there." --Erotica Revealed

"The possibilities for this time were limitless and I think the collaborator collected the best of the best. These stories are as varied in their subjects as they are arousing!" --Hedo Vibes

D.L. King has edited over a dozen erotica anthologies and her short stories appear in more than five dozen more. A Lambda Literary Award winner (The Harder She Comes), two-time IPPY gold medalist (Carnal Machines, The Harder She Comes) and one-time silver medalist (Under Her Thumb), she most recently edited the best-selling Slave Girls: Erotic Stories of Submission. She is the author of two novels, The Melinoe Project and The Art of Melinoe. Her work can be found in anthologies such as The Mammoth Book of Best New Erotica, Best Women's Erotica, Best Lesbian Erotica, Girl Crazy, Luscious, No Safewords, Yes, Ma'am, and Yes, Sir. She lives in New York City.
Loading...
or
Not Currently Available for Direct Purchase