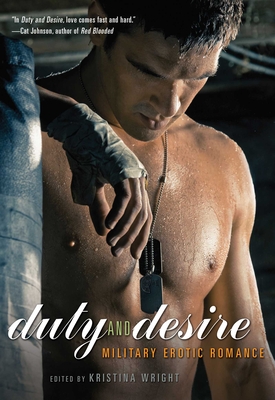 The only thing stronger than the call of duty is the call of desire! This anthology of military erotic romance serves up a team of hot-blooded men (and women) from every branch of the military who serve their country and follow their hearts wherever they might be stationed. When the mission is done, the unit is recalled or the ship pulls into port, they set their sights on a new target--the pursuit of passion and love. In and out of uniform, stateside and abroad, these military warriors meet passion and danger head on. All's fair in love and war--in and out of uniform. Edited and with stories by Kristina Wright, wife of a Lieutenant in the U.S. Navy, Duty and Desire includes stories of U.S. soldiers, sailors, aviators, Marines and Special Forces (Navy SEALs, Army Rangers, and many more. Uniforms have never been sexier!

"In the confines of a vintage Mustang, two soldiers just back from Afghanistan head for home. Along the way, they manage to bring new meaning to the phrase "Park and Ride."
Penthouse

"Be ready to get up close and personal with the military when you pick up this collection. Featuring well-known erotica authors, including Delilah Devlin, J.K. Coi and Christine D’Abo, this anthology will give readers a lot to love. While each story has special meaning, it is Ericka Hiatt’s Fighting for Fresno” that stands out as a passion-filled tale, with incredible intimacy and beautifully raw emotion. The 18 short stories that make up this collection take place in different countries and even different times. Many of the stories are heterosexual relationships, but there is also the occasional same-sex couple. The anthology’s uniting element is the fact that each couple featured includes military personnel."
RT Book Reviews

"Wright, herself a Navy wife, assembles 18 red-hot tales of men and women in uniform that range from WWII-era Russia to modern-day Afghanistan. While celebrating the valor, not to mention hotness, of those who serve their country, this anthology commendably covers darker issues, including post-traumatic stress syndrome and serious injuries, and love of all kinds, both straight and gay. Perhaps most touching is Sacchi Green's "Sergeant Rae," about two female soldiers sharing their lives together after one becomes a paraplegic saving the other's life in Iraq. Other standouts include Christine d'Abo's "Wilco," which serves up BDSM with a twist-a female junior officer and her submissive male superior-and Michelle Augello-Page's "Home," about a soldier deployed to Afghanistan having a hot webcam tryst with his stateside wife. This touching and realistic lineup is highly recommended. (Dec.)"
Publishers Weekly

In Duty and Desire, love comes fast and hard. From the quintessential military man, to the women who don a uniform and serve beside them, and the loved ones who wait at home for their return, both in the past and the present, the stories in Duty and Desire have it all."
Cat Johnson, author of Red Blooded