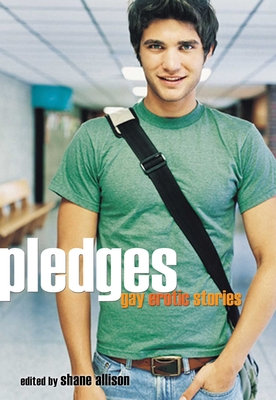 Wrestling at the frat house, toga parties, plenty of pledge paddlings, and initiations of the sexy kind will have every man on campus lined up to join the fraternity of beautiful men who know how to have fun, especially with each other! Shane Allison, recipient of the Gaybie Award for his fine fiction in College Boys returns to the campus for another set of page-turning, arousing adventures featuring hunky undergrads getting it on. Ryan Field shows us that pledge sex is the best sex in "It's Not Hazing, It's Brotherhood." Hot, sweaty sex ensues between a pledge and his handsome professor in Heidi Champa's "Caught Red Handed." There's some major heat to the seat action going on in Logan Zachary's "Spank You, Sir, Could I Have Another?" The lines of gay and straight get blurred in Pepper Espinoza's, "On Restriction." Barry Lowe has got something for the most loyal of butt connoisseur in "Spin the Bottom." Two young pledges are put through a series of seedy challenges in Eric Del Carlo's "Pecking Order." Gregory Norris amazes with "Heaven Week." Michael Bracken proves that you have to "give" some head to get ahead in "What a Rush."

"Lovers of college frat erotica rejoice! Pledges, edited by Shane Allison, is filled with hunky college boys acting out and getting what they want from higher education."--Airen Wolf Reviews

"These tales cover the arousing adventures of a chapter's fresh meat, and take readers through the scintillating excitement of rush week to the sexy shenanigans late at the frat house."--Adult Video News

"Good stories are told with an audience in mind. Great stories can stay true to that audience, yet appeal to a broader range of readers. Pledges, a new anthology of gay erotica, manages to do exactly this."--Sexlife Canada

"We see what happens when a bunch of college guys get together and indeed, everything you might think could happen does indeed happen. This just might be the hottest higher education that is possible to get."--Amos Lassen

Shane Allison has been published in countless literary journals and publications, such as McSweeney's, Velvet Mafia, Mississippi Review, New Delta Review, and Outsider Ink. He is the editor of Backdraft and Hot Cops. His stories have also appeared in anthologies such as Best Black Gay Erotica, Truckers, and Cowboys. He lives in Tallahassee, FL.
Loading...
or
Not Currently Available for Direct Purchase