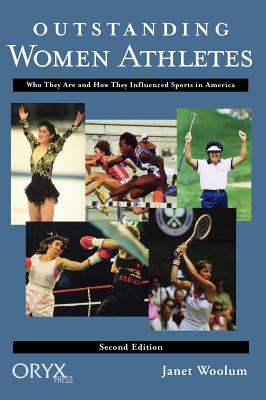 Who They Are and How They Influenced Sports in America, Second Edition

DescriptionA unique combination of history, biography, bibliography, and statistics, the widely acclaimed first edition of Outstanding Women Athletes has now been updated to reflect the many significant changes that have taken place in women's sports in America in recent years. Now added are the biographies of 26 sports figures who have recently emerged as role models in traditional women's sports such as tennis and figure skating as well as in sports that historically excluded women such as mountain climbing, bullfighting, and boxing. Also new is a chapter profiling 10 women's championship teams, including each organization's history, brief biographies of 200 selected team members, and major team achievements.

JANET WOLLUM is the author of the first edition of Outstanding Women Athletes: Who They Are and How They Influenced Sports in America. She holds a master of arts degree in womens history from Arizona State University and has been researching and writing on the history of women in sports for more than a decade. Woolum was a member of the 1995 U.S. National Bowling Team and is an Olympic Festival gold medalist.
Loading...
or support indie stores by buying on