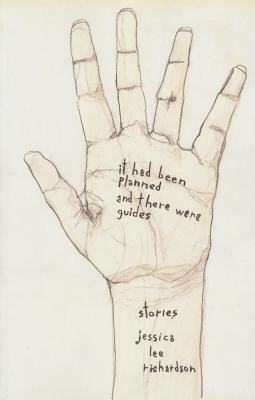 It Had Been Planned and There Were Guides

Jessica Lee Richardson’s debut collection It Had Been Planned and There Were Guides teems with double magic—families of spiders, monsters in triplicate, and panels of bleacher-sitting grandfathers (who live in a diaphragm!) cohabitate with a starker, more familiar kind of strange in a hyper real and living tapestry of teenage porn stars, lovelorn factory workers, and art world auctioneers. From a woman who awakes from a short kidnapping with an unquenchable need for risk to a concrete boat ride gone off the rails, from Los Angeles to the Bronx, from the Midwest to North Korea, these stories explore the absurd in real spaces and the real in absurd spaces, seeking a way into something else entirely.

Here, environments participate in agency, and voice compels movement forward, through, and in. Richly patterned language refuses singularity and the finger trap of the binary, seeking permeability in its reflection, a soft net to catch collective echoes. The collection begins and ends with stories that literalize descent and ascent, bookending the mirrored shape of the book’s arrangement as a vision of an inverted arc. The shape of story is literalized. We slide down from a mountaintop all the way to the inside of a womb and back, slipping on slopes unmarked by signs, catching stunning glimpses along the way. The journey along the track of desire might be frightening if it weren’t for all the water, if it weren’t for the bounce of the ride.

Praise For It Had Been Planned and There Were Guides: Stories…

“This book has heart and heft and heat and equal doses of wonder and quirk to keep us on our toes, not knowing what might be waiting for us, not just on the next page but inside the next sentence. Richardson’s tongue is an organ of the eye. Her prose sings cleanly, her ear hears with its hand not just cupped around it but it reaches out to pull us in and hold us all a little closer.”
—Peter Markus, author of The Fish and the Not Fish, We Make Mud, and The Singing Fish

“You know how you keep that piece of paper and pen next to the bed to capture those brilliantly enriched osmotic mots justes emanating from the edge of the edge of waking sleep? And you know how the vivid quarry eludes you; how you’re left with the snare of scribbles, memories of memory, in the morning light? The stories in Jessica Lee Richardson’s teeming It Had Been Planned and There Were Guides are goddamned Google maps of those saturated hypnopompic, hypnagogic states, rendered with such exacting detail and pristine clarity that you can do nothing more than conclude the murky margins of the world have been turned inside out and the meanest meanings ever meant are sunbathing there, plain as day.”
—Michael Martone, author of Michael Martone and Four for a Quarter

“‘Then a surprising thing happened, which is that we didn’t die.’ Jessica Lee Richardson’s brief, jagged, lit-up stories present a world of precarity in which the precincts of the sentence propel the protagonists towards and away from peril with the capriciousness of wanton gods: ‘I dropped through the trap door at the bottom of the bottom and came out on top.’ In this world of prodigious and acute risk, in which every angel is drug tested and Baby Girl Bristol reads the writing on the wall, radiant hyperfluency is both a necessary skill and an interface through which all the toxic mediumicity of our present moment can flood. ‘I looked in the mirror and it was like I could see the halo. Now I have Beyoncé in my head. Google.’ Amen.”
—Joyelle McSweeney, author of Salamandrine: 8 Gothics and Dead Youth, or, The Leaks

"The space between outside and in is a messy line, like the sight of a brutal murder, and Richardson navigates it with humor, making puns of the slippage between larger culture and private memory. Another way to say it is that these stories go for the juggler, and that for every ball dropped it is a dizzying experience, keeping your eye on what's in the air."
—Bookslut

Jessica Lee Richardson was born in New Jersey, began her career as a performer living in Brooklyn, and earned her MFA in 2013 from the University of Alabama. Her writing has appeared in the Indiana Review, Caketrain, and Joyland, and has been recognized with awards from the National Society of Arts and Letters and the F. Scott and Zelda Fitzgerald Museum.
Loading...
or
Not Currently Available for Direct Purchase